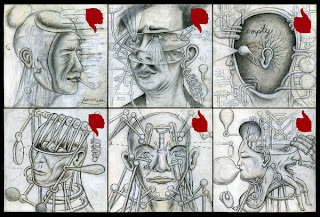 The NY Times has some psychology articles that I will post over the next few days. First is controversy over the new DSM-5 that will dominate diagnoses for years to come. The NY Times reports:

This weekend the Board of Trustees of the American Psychiatric Association will vote on whether to adopt a new diagnostic system for some of the most serious, and striking, syndromes in medicine: personality disorders.

But when full-blown, the disorders are difficult to characterize and treat, and doctors seldom do careful evaluations, missing or downplaying behavior patterns that underlie problems like depression and anxiety in millions of people. ...

The entire exercise has forced psychiatrists to confront one of the field’s most elementary, yet still unresolved, questions: What, exactly, is a personality problem? ...

The most central, memorable, and knowable element of any person — personality — still defies any consensus.

A team of experts appointed by the psychiatric association has worked for more than five years to find some unifying system of diagnosis for personality problems.

The panel proposed a system based in part on a failure to “develop a coherent sense of self or identity.” Not good enough, some psychiatric theorists said.

Later, the experts tied elements of the disorders to distortions in basic traits.

For example, an interim proposal for narcissistic personality disorder involved rating a person on four traits, including “manipulativeness,” “histrionism,” and “callousness,” and the final proposal relied on just two, “grandiosity” and “attention-seeking.” The current definition includes nine possible elements. ...

“You simply don’t have adequate coverage of personality disorders with just a few traits,” said Thomas Widiger, a professor of psychology at the University of Kentucky.

Dr. Widiger compares the process of reaching a consensus on personality to the parable of the six blind men from Hindustan, each touching different parts of the elephant. “Everyone’s working independently, and each has their perspective, their own theory,” he said. “It’s a mess.”

“It’s embarrassing to see where we’re at. We’ve been caught up in digression after digression, and nobody can agree,” Dr. Millon said. “It’s time to go back to the beginning, to Darwin, and build a logical structure based on universal principles of evolution.”

This isn't science. They are just listing personality traits that they don't like.

I got sent out by the family court 8 times to see if I had any of these disorders, and every one of the experts said that I did not. They could not find any fault in anything I did. But the judges just ignored the reports anyway.
Posted by George at 8:00 AM

Thanks, I was about to post on that. They did not really completely Asperger, as it was renamed. http://www.cbsnews.com/8301-204_162-57556754/aspergers-syndrome-dropped-from-american-psychiatric-association-manual/