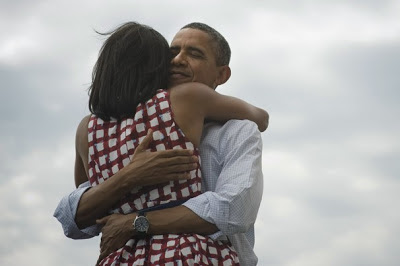 Look carefully at this picture. Philip Kennicott writes in the Wash. Post:

Sent from the president’s Twitter account Tuesday night shortly after news networks declared him the winner, the photograph was immediately retweeted hundreds of thousands of times, making it the most popular image in Twitter history and propelling it to instant love across a host of social-networking programs. ...

The president, if anything, seems to need this hug and appears almost dependent and vulnerable. The obligatory masculine markers of leadership — resolve, self-sufficiency and emotional equanimity — dissolve into the obliterating communion of two people lost in their own love world. ...

The Obama photograph shows another reality, what might be called the limitless possibilities of true mutuality, of marriage beyond strict definitions. The Obama marriage appeals to many people, because it seems so comfortable, as if no one is worried about who wears the pants in the house, which is the reality of many healthy marriages today. In a healthy marriage, the partners don’t simply step into ancient gender roles and enact a drama of fidelity and obedience, they invent their own roles in the manner that serves both people best. Marriage is improvisatory, and every marriage is unique. Variation flourishes, and people work it out.

She appears to wear the pants in that family. Hillary Clinton is more masculine than Barack Obama. We just had a chance to put a real man back in the White House, but the parasitic interest groups chose the effeminate one. I think that Michelle even has bigger muscles than Barack. 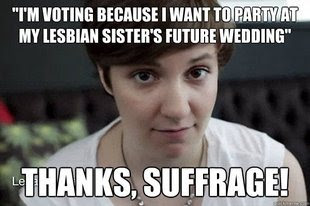 Here (on the right) is one of the feminists we can thank for re-electing Obama.

Obama has never taken white feminists seriously. The only bit of feminist boilerplate I noticed in Obama’s 150,000-word memoir was a single clause within a long sentence. Indeed, resentment of his working mother and grandmother is a constant theme running through his pointedly entitled Dreams from My Father. You can tell how un-African-American Obama is by upbringing from his passive-aggressive sniping at his mother and grandmother, something that a normal black man just wouldn’t do.

Over the years, Obama’s treatment of his pioneering female bank executive grandmother, who paid for the bulk of his posh education, has been noteworthy in its nastiness. In his celebrated 2008 Philadelphia speech, for instance, he compared her to Rev. Jeremiah Wright over her supposed racism for wanting a ride to work because she feared being mugged by a black drifter who had been hassling her at the bus stop. This hurt the strapping youth’s feelings. Over a decade later in his memoir, he described the emotional impact on himself of his grandmother’s worries about her safety as a “fist in my stomach.”

In 2011, Obama took the opportunity of his one meeting with biographer David Maraniss to call attention to his grandmother’s “alcoholism” (see p. 287 of Barack Obama: The Story.) Thanks, Mr. President, glad you pointed that out for us so we can remember her that way. Classy. ...

When friends despaired, I would cheer them up by pointing out that at least almost nobody believes in feminism anymore the way they did during the Anita Hill brouhaha of 1991, back when aggrieved feminist dim bulbs like Susan Faludi and Naomi Wolfe were treated as giants of human thought.

In reality, the vaunted gender gap in voting behavior is fairly small compared to the huge marriage gap.

I have pointed out that Obama lies about his mom and grandmother.

We still have feminists in this stupid little beach town where I live. The Santa Cruz Sentinel reports:

The UC Santa Cruz Feminist Studies Department officially celebrated the launch of its long-awaited graduate program with a kickoff reception Oct. 29 at the chancellor's house.

The campus is now accepting applications for the new doctorate program in feminist studies, which is set to begin next fall. The deadline to apply for the inaugural program is Dec. 15.

"The Ph.D. in feminist studies at UC Santa Cruz is an interdisciplinary program that investigates how relations of gender are embedded in cultural, political, racial and social structures," said department chair Lisbeth Haas.

"It will provide students with advanced training in critical race and ethnic studies, sexuality studies, and the study of science and social justice," she added.

The aim of the new program is to train scholars and teachers, and also to serve the needs of professionals for careers in areas such as public policy and human rights research and advocacy. ...

UCSC's Feminist Studies Department maintains longstanding relationships with the departments of anthropology, art, history, history of art and visual culture, history of consciousness, Latin American and Latino Studies, literature, politics, psychology, and sociology, and is affiliated with the Science and Justice Research Center on campus.

It also is home to one of the largest feminist studies undergraduate degree programs in the nation, and it is an internationally recognized center for feminist scholarship. ...

Note that the purpose is not to discover new knowledge, like other departments. The stated purpose is to brainwash train students in feminist policy and advocacy. You would never get a degree unless you were advocating the approved political views.

Bettina Aptheker and Angela Davis are real (Jewish and black) lesbian Communists. That's Communist with a capital-C, not just effeminate commies like Obama. Obama's main accomplishments were the socialist takeovers of the health-care and automobile industries, and his main campaign strategy was to attack Mitt Romney for being a capitalist. But Obama never actively conspired with the Soviet Union to betray the USA, as far as I know. Aptheker and Davis are the worst role models any university could have. Davis was the highest ranking professor at UCSC, and the best thing I can say about her is that she was once kicked out of the Communist Party in one of their foolish purges.

Gina Dent is so obviously engaged in a culture war that her web site has a list of "Our Allies". If you call her Gina and pronounce it Jee-nuh, she will correct you and say, "My name is Jine-uh Dent, as in Vagina Dentist." She looks like a young Angela Davis, from around the time Davis was a fugitive for buying the shotgun that was used to murder a judge in a California courtroom. That was back in 1970 when the criminal court was more dangerous than the family court, and being a no-good Commie on trial could get John Lennon and Yoko Ono to record a song in your support. I don't think I want to know why Dent identifies with a vagina dentist, whatever that is. 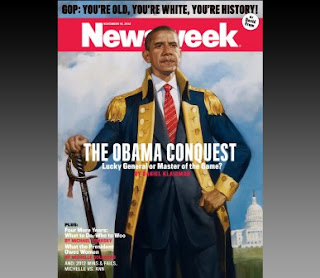 Newsweek magazine is going out of business, and here is one of its last covers. They were pro-Obama, but they are old and white, and I guess they now identify with the Republican losers.
Posted by George at 8:00 AM

Looks to me like a photo of a husband and wife hugging eachother. I suppose you can read whatever you want into it if you're desperately inclined to do so.

I don't understand why you care about the Obama family's pants, he's just hugging his wife. Also I'm pretty sure that a great relationship with one's grandparents isn't a requirement for being African American.