It used to be that parents had the authority to act on behalf of their underage kids. Now they can be second-guessed by judges who might have other opinions about the child's best interests.

Parents can legally eavesdrop on young children if they reasonably believe it would be in the child's best interest, the state's highest court ruled Tuesday, establishing an exception to New York law against wiretaps without the consent of at least one person on a call.

The 4-3 ruling by the Court of Appeals involved a cellphone recording of a man threatening to beat the 5-year-old son of his live-in girlfriend. The boy's father recorded the conversation.

"The father had a good faith, objectively reasonable basis to believe that it was necessary for the welfare of his son to record the violent conversation he found himself listening to," Judge Eugene Fahey wrote for the majority.

He cautioned that the ruling shouldn't be interpreted as a way to avoid criminal liability for wiretaps "when a parent acts in bad faith."

The live-in boyfriend, Anthony Badalamenti, was later convicted of child endangerment, assault and weapon possession. His attorney challenged the tape as inadmissible evidence from illegal eavesdropping.

Fahey cautioned that courts must consider the age and maturity of the child in considering parental eavesdropping. He didn't specify an age.

A key question "is whether the child is capable of formulating well-reasoned judgments of his or her own," he wrote.

So I guess a New Yorker can eavesdrop on a 5-year-old who is being threatened with a beating. In any other case, I have no idea.

I think that it is crazy that a father has to make a legalistic best-interests analysis to record his 5-year-old son in a potentially dangerous situation. But that is the society we now live in, and the dad only won by a 4-3 vote in a NY appeals court.
Posted by George at 8:00 AM 2 comments:

A reader sent these. 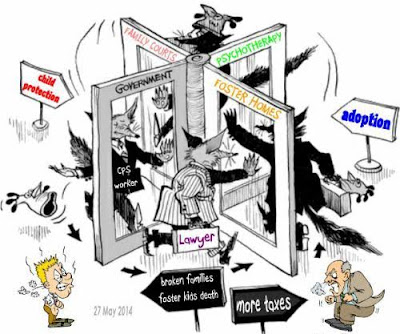 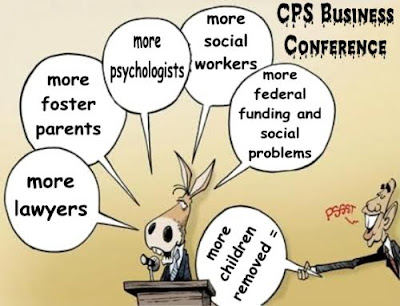 Whenever I hear or read stories about Child Protective Services (CPS), they are always either about harassing good parents, or causing some kid to suffer or die.

Here is the latest. The Santa Cruz Sentinel reports:

Despite high-profile child abuse and neglect cases, including many in the Bay Area, authorities have been slow to make substantive changes to the often underfunded and under staffed agencies, experts said.

In the horrific case of Shaun, 6, Delylah, 3, and their 9-year-old half sister, 135 pages of Monterey CPS documents obtained by the Contra Costa Times, and the state’s highly critical review of the case, found that social workers called repeatedly to the home in 2015 violated five state regulations and ignored best practices intended to keep children safe.

But that branch of CPS is not alone. The U.S. Department of Health and Human Services found that in about 12 percent of all 2014 child fatalities involving abuse and neglect, the families had prior contact with CPS. During that year, 3.2 million children were the subject of at least one CPS report and 1,546 kids died from maltreatment, 70 percent of those under the age of 3. Of those fatalities, 131 were in California. ...

The same year, Contra Costa health officials paid $300,000 to the biological parents of a girl who died in foster care. Deonna Green was nearly 3 years old, yet weighed only 19 pounds, when she died in 2006. She was being fed baking soda by her guardian. ...

But last month, a federal commission charged with developing a national strategy to eliminate child abuse released the results of a two-year probe that delved into case studies, examined what went wrong and what can be done to stop vulnerable children from falling through the cracks. The National Strategy to Eliminate Child Abuse and Neglect Fatalities commission estimated that between four and eight children will die every day from abuse and neglect unless major reforms are made. The commission criticized the lack of communication among various agencies, and issued several recommendations for agencies and states to follow to save children’s lives, among them:

CPS will probably say that it could do a better job with more money. I don't believe it.

A CPS social worker told me that they routinely investigate parents over and over again, even if no problems are ever found. She said that it is not unusual to investigate a parent 10 times, without finding anything.

At the same time, they have kids in foster care dying of malnutrition, and no one bothers to check that a kid has a normal weight.

I don't know whether these CPS workers are incompetent or evil or what, but we would all be better off if the agency were shut down.
Posted by George at 8:00 AM No comments: