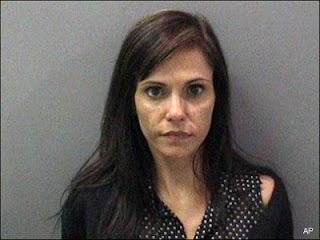 Nadia Lockyer, the former Bay Area supervisor and estranged wife of California's state treasurer, will be allowed to visit her 9-year-old following her drug arrest in Orange County last month.

Lockyer, a former Alameda County supervisor, was arrested by Orange police on Aug. 28 after a tipster told authorities that the 41-year-old woman was in possession of drugs, prosecutors said.

At the time, Lockyer was living with her son at a relative’s home in Orange. When police arrived, they found drug paraphernalia and observed that Lockyer appeared to be under the influence of methamphetamine, prosecutors said.

On Monday, a judge granted a modified protective order allowing Lockyer to call her son and also to visit with him as long as the boy’s father is present, said deputy district attorney Andrew Katz.

Bill Lockyer is the Democrat California state Treasurer, and former state attorney general. I posted on them back in Feb. and March, when Mrs. Lockyer ran off with a meth addict, made sex tapes with him, and then accused him of beating her up.

Nadia Lockyer is also a Democrat, lawyer, and feminist. She accused her husband of setting her up on the drug charges, but withdrew the accusation.

Bill Lockyer filed for divorce in July, citing "irreconcilable differences" and seeking joint physical and legal custody of their son. His spokesman, Tom Dresslar, last week said that "Bill hopes Nadia has a successful recovery, and he also wants to make clear that Diego is living with him in the Bay Area and he's safe and sound."

Dresslar said Monday that Bill Lockyer agrees with the court's decision allowing his estranged wife to talk to and see their son.

He seems quite tolerant of the woman who betrayed him over and over again.

I not posting this just because it is a scandal. These are politicians who helped bring us the screwed up anti-family policies California has. Here is a 2010 story:

Alameda County Board of Supervisors District 2 candidate Nadia Lockyer today announced she has the endorsement of Deborah Roderick Stark, whom she described as “a nationally recognized expert in child and family policy” and a First Five Alameda County Commission member.

“As a mother, former adult caregiver, and someone who deals with families everyday as the Executive Director of the Alameda County Family Justice Center, Nadia understands the needs of families and what it takes to keep communities healthy. Nadia Lockyer will be a voice for the children and families of Alameda County when she will serve on the Board of Supervisors, representing the people of District 2,” Stark said in the news release.

The news release delves deeper into both women’s professional bona fides, but doesn’t mention that Lockyer, 38, is the wife of state Treasurer Bill Lockyer, 68, or that Stark, 43, is the wife of Rep. Pete Stark, 78.

So Mrs. Lockyer was running a "Family Justice Center" where she helped women make phony domestic violence accusations in order to win child custody. These people are evil.
Posted by George at 8:00 AM

Have you considered taking up methamphetamines? Seems to be a good way to get custody.

You may not be serious, but the answer is yes.

I wish that I had taken up meth. Then I could have blamed my addiction, gone into rehab, documented a series of clean drug tests, and gotten my kids back.

No, you shouldn't wish that you took up meth. You're logic would seem to make a sort of weird sense, but because you're the male spouse, there would be a bias held against you because of your drug using history. With women, it's leverage used in their favor, with men, it's used against the man. No, of course it's unfair, but the game is rigged vs. the male regardless of the circumstances.

You'd be deemed the "drug addict". women are deemed the rehabbed, and often accuse the man of being a drug addict, too who hasn't been thru rehab..

I lost custody, while my ex. was on methadone, and accused me of drug addiction, when I wasn't on drugs. I couldn't even take pain killers after a major operation, because I was accused of abusing prescription drugs.

She, nor the courts, ever demanded drug testing for me, just made accusations, while producing her clean drug tests while she was on methadone.

You are probably right. Maybe I could have just had an alcohol problem.

Sorry, but if it's rigged, like it's so obviously been about everything for you and most men, then it's just plain rigged, and the facts and circumstances are irrelvant. They'll just spin what's there and fabricate what's not there till spend a fortune and lose.

They f'ing got you wishing that you'd had a substance abuse problem, to solve the problems that they cruely stuck you with.