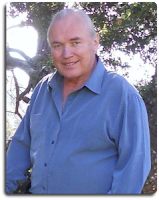 Capitola police received a report in January that Dr. John Visher possibly had committed lewd acts with a minor who was his client at the time. According to the criminal complaint, the incidents are alleged to have taken place sometime between September 2009 and December 2009, prosecutor Michael Gilman said.

The girl was 8 years old at the time.

During the course of the police investigation, a search warrant was executed at Visher's home and his office on Bay Avenue in Capitola.

Due to potential patient-therapist privilege issues, the court appointed a special investigator to review all items seized during the investigation. Members of the Sheriff's Office and the District Attorney's Office assisted.

Visher was arrested by Capitola police detectives Wednesday. He's charged with committing lewd acts with a child younger than 14, displaying harmful matter to a child and four counts of possession of child pornography.

I called Visher when I was looking for a psychologist for the court. I guess I dodged a bullet. His web site says:

Dr. Visher is retiring at the end of August 2012 after 3O years as a Licensed Clinical Psychologist. He wishes to thank all his former patients and professional associates for the most rewarding and meaningful career imaginable.

Amusingly, his page has a bad link to the APA code of ethics.

This story seems fishy to me. I don't believe that he suddenly became a child molester at age 62, and then was suddenly discovered 3 years later. Either he is being falsely accused, or his corrupt colleagues have been protecting him for years.

I wonder how psychologists like Bret Johnson, Ken Perlmutter, and Faren Akins continue to keep their licenses and testify in court, in spite of shortcomings that are obvious to everyone who deals with them. It is because the whole profession is corrupt. I really doubt that these shrinks are any better than Visher.

Psychopaths have a remarkably poor sense of smell, according to a new study.

Researchers in Australia tested a theory that psychopathy - a severe personality disorder characterised by lack of empathy, antisocial behaviour and callousness - may be linked to impaired smell ability.

Both phenomena have been independently traced to dysfunction in part of the brain called the orbito-frontal complex (OFC).

Maybe the state should give olfactory tests with Sniffin Sticks before licensing psychologists and lawyers.
Posted by George at 8:00 AM

When my extended family first sought counseling from Dr. Bill, in 2003, he told us that he was taping our sessions and "chose" to do that because he had some "false accusations" in the past. His trial starts in just three days (Jan 13, 2014)--I guess his abuse of power is done now.