Essay on who needs men

A reader asks about this Greg Hampikian article in the NY Times a couple of weeks ago:

With expanding reproductive choices, we can expect to see more women choose to reproduce without men entirely. Fortunately, the data for children raised by only females is encouraging. As the Princeton sociologist Sara S. McLanahan has shown, poverty is what hurts children, not the number or gender of parents.

That’s good, since women are both necessary and sufficient for reproduction, and men are neither. ...

Greg Hampikian is a professor of biology and criminal justice at Boise State University and the director of the Idaho Innocence Project.

I did cite this article when I posted a letter by McLanahan denying that her work ever showed that fathers were unnecessary.

While these articles are annoying, I do think that there is something to what they say. Changes in laws, culture, and social policy are marginalizing boys and men.

I noticed this when my kids were in elementary school. Almost everything the school did was oriented for girls, not boys. I did not mind because I had girls. But our society needs men also.

Here is a current example of parents being punished for letting boys be boys:

A Virginia mother was recently interrogated four times by police, and visited twice by social services, after neighbors spotted the mother's children playing in their own yard unsupervised, and decided to report the non-incident to local authorities. ...

Just a few days ago, for instance, Tammy Cooper of La Porte, Texas, was actually handcuffed and arrested for allowing her children to play outside on their motorized scooters in the family's cul-de-sac. Cooper was forced to spend the night in jail for this non-crime, despite the fact that she had been outside with her two children watching them the entire time.

While most new technologies do favor women, not all do. DNA paternity testing means that moms can no longer lie about who the dad is. Drug testing can be used against women who damage their babies by taking drugs during pregnancy. Other technologies like birth control and abortion favor women, but they also favor men by allowing more sexual relations without consequences.

To show how far we've come, the Democrat Convention had a 30yo privileged single woman whining about she wanted someone else to pay for her birth control pills, and praising Pres. Obama for sticking up for her when people made fun of her. We have a whole political party oriented towards feminist goals. 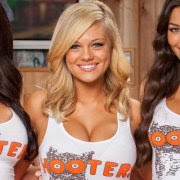 The Atlantic magazine, publisher of that end-of-men article below, has this followup article:

There are lots of statistics you could break out to illustrate the growing power of women in the economy. But if numbers don't do it for you, then just look at what's going on at Hooters.

After five years of falling sales, the restaurant chain is trying to revamp its fortunes by easing up on its unreconstructed frat-boy image and appealing more to female customers, all without ditching the waitresses parading around in skimpy t-shirts and shorts. Sound like a tough sell? I think so.

But according to Bloomberg Businessweek, CEO Terry Marks believes that by tweaking the menu with more salads and fresher ingredients, lightening up the beach shack decor, and adding space for a bit of nightlife, the company can at least make its franchises an acceptable destination for more wives and girlfriends. As of now, about two-thirds of their patrons are guys.

Not sure whether to laugh or to cry.
Posted by George at 8:00 AM

Unfortunately, it will take economic collapse before things can be righted. I don't put any stock in the "democratic process" to make any significant changes.

Too many women and men actually believe this matriarchy is going to work out. Western civilization is on life support, the ship has hit the ice cube, and the Dems think it's just fine.

Ever hear of a matriarchy that lasted more than 100 years?

There's a reason for that.