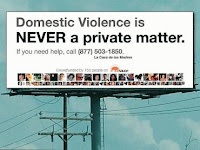 When the newly elected San Francisco sheriff was accused of domestic violence against his Venezuelan soap star wife, he uttered a political cliché that has mocked him ever since: It's a "private matter."

The case that goes to trial this week against Sheriff Ross Mirkarimi has become a public sensation from Caracas to the Castro. And talk about in-your-face -- a support group opposed to domestic abuse erected a billboard in downtown San Francisco declaring: "Domestic Violence is NEVER a private matter." Thousands of dollars to pay for it were raised in mere days through an Internet campaign that went wild.

It's the second Bay Area case in a month -- one in San Francisco, the other in the Hayward Hills -- that exposes rocky relationships between local politicians and their trophy wives. State Treasurer Bill Lockyer, 70, is still reeling from the humiliation rendered by his 40-year-old alcoholic wife who had an affair with a meth addict she then accused of beating her up.

I am glad that these cases are getting a lot of publicity out here in the wacky San Fran area, but they illustrate what is wrong with domestic violence law.

It has become leftist-feminist dogma that the state should intervene in private families if someone disapproves of some of their behavior. Just look at that billboard. And they are constantly expanding the definition of domestic violence so that it no longer means physical violence. It can now mean just about anything where the wife feels mistreated.

In this sheriff case, the wife never even made a complaint:

Lopez, 36, is denying she is a victim of her 50-year-old husband, despite crying in front of a neighbor's video camera and saying that her husband grabbed and pulled her during then argument and left a large bruise on her arm. The video, Lopez said in legal documents, was "scripted and directed," by the neighbor, Ivory Madison, and was preceded by the two of them laughing together.

According to court documents, the video was apparently intended to be used as an insurance policy of sorts, in case the couple divorced and Lopez needed evidence against him in a custody battle.

"I'm going to use this just in case he wants to take Theo away from me," Lopez said on the video, according to the court records. He had already threatened to do so because he told her "he's very powerful," she said on the tape.

The neighbor called police Jan. 4, and despite newspapers reports of the investigation and calls for him to step aside until the case was resolved, Mirkarimi took his oath of office Jan. 8, raising his hand and swearing to uphold the law of the land. His 2-year-old son was at his feet. His wife was by his side. She wore a sleeveless dress. Less than a week later, prosecutors charged him with the trio of misdemeanor counts.

In court filings, Lopez says she feels "betrayed" by her neighbor, who she believed was a lawyer who would keep their conversation confidential. Indeed, Madison had studied to be a lawyer, but never practiced. After Madison's phone call with police -- which Lopez's lawyer said started anonymously -- Madison "ran up to" Lopez and said, "You're going to kill me. I called police and they made me tell them."

In her declaration, Lopez said she was "totally shocked" and "I yelled at Ivory Madison. I said, 'NO. This is wrong. I came to you for legal help. You do not have my permission.'"

There are many things wrong here. If we had laws guaranteeing joint custody, then would have never seen a value in making a video as an "insurance policy". If Madison had really been a friend, she would have kept her mouth shut. If the normal rules of attorney-client privilege applied, then the cops could not have seized the video. If normal criminal law applied, then the DA would have no case unless the wife chose to press charges. If the sheriff were innocent until proven guilty, then he would be able to live in his home and see his family, pending trial.

But the issue is bigger than these legal procedural issue. Let's assume that the facts are as reported, that the leftist San Fran sheriff is a little bossy at times, that the hot-headed Venezuelan drama queen has argued with him, that one evening he gripped her so hard that her arm was bruised, and that she says now that all is forgiven. How is this anyone's business? In the view of leftist-feminists and out-of-control do-gooder govt authorities, there are no limits to how much they will invade the couple's privacy if it has the purpose of busting up their family:

Jury selection is expected to proceed as planned Monday in San Francisco's Hall of Justice. But first, one of Mirkarimi's old girlfriends is expected to slip through a back door of the courthouse to meet privately with lawyers in the judge's chambers. She has her own story to tell about being on the receiving end of Mirkarimi's temper and was once pushed "up against a wall."

How is this relevant? It is an anonymous complaint from many years ago, in which no one was hurt and no one made a complaint at the time.

There is a leftist-feminist campaign to destroy the American family. A generation ago, no one would have favored using the courts to bust up a family like this. Now the leftist-feminist-Democrat mantra is "never a private matter".
Posted by George at 8:00 AM