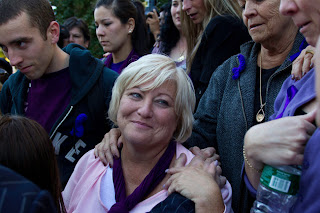 A husband-killer got acquitted last week:

She had always admitted to killing her husband, using two guns to fire 11 bullets inside the couple’s home in Queens. But she insisted she had no choice: if she had not shot him, he would have surely killed her first.

On Thursday, a jury in State Supreme Court in Queens agreed, clearing the woman, Barbara Sheehan, of second-degree murder charges in a case that had been viewed as a strenuous test of a battered-woman defense. ...

During the trial, the jury heard how Ms. Sheehan had been relentlessly abused by her husband, Raymond Sheehan, a former police sergeant, during their 24 years of marriage. But the critical question at trial was whether Ms. Sheehan was in imminent danger when she killed her husband; New York State’s self-defense law justifies the use of lethal force when a threat to a person’s life is deemed immediate. ...

The physical evidence appeared unpersuasive: Mr. Sheehan had been shaving before he was killed; his body was found on the bathroom floor, the faucet still running.

Ms. Sheehan testified that the couple had a fierce argument the day before, and she had decided to leave, carrying one of her husband’s guns for protection. When her husband saw her, she said, he reached for a gun on the bathroom vanity and aimed it at her.

Your article on the acquittal of Barbara Sheehan, a domestic violence survivor, included problematic language. For instance, it said, “Legal experts said the verdict was a vindication for the so-called battered-woman defense.”

This language suggests that there is a special defense, a get-out-of-jail-free card for claiming a history of abuse. This creates both social and legal pushback to the introduction of evidence that all defendants are constitutionally entitled to present.

There is no special battered woman’s defense. What we are talking about is evidentiary support — highly relevant and admissible — as to whether or not the defendant reasonably believed that her life was in danger.

The use of admissible evidence should not require any “vindication.” It is a disservice to domestic violence survivors — and a detriment to how we respond to this epidemic — to suggest that introducing the truth in a court of law is somehow seeking special treatment.

Ms. Warnken is a lawyer and a legal policy associate with the Chief Justice Earl Warren Institute on Law and Social Policy at the University of California, Berkeley School of Law. Ms. Lemon, also a lawyer, directs the domestic violence program at the law school.

Huhh? I didn't really get their point, so I tried to google these two dames to see if they have written scholarly papers on the subject. For Warnken, I just found this 2007 story:

Heather Warnken had the great fortune of winning Modern Bride of the Year. But then, she had the great misfortune of being noticed by Gawker, who Gawker's excoriated her and her husband-to-be for registering for a honeymoon rather than for traditional gifts.

That is too weird. Maybe Heather Warnken is a more common name than I thought.

I did find the Nancy K.D. Lemon faculty page. It says that she is a woman, but I couldn't tell from the picture. It says, "Lemon holds a B.A. degree in Women's Studies, a major she co-founded, from the University of California, Santa Cruz." That figures. We sure attract the goofballs. She looks a little like k.d. lang, the Canadian lesbian animal rights pop singer. Is "K.D." some kind of lesbian code?

For my politically correct readers here, I am not gay-bashing. I really don't care about her sexual orientation or identity. I do care if a whole generation of judges and lawyers has learned completely wacky notions of marriage, domestic violence, and justifications for husband killing.

On Lemon's scholarly work, I found this debate:

Christina Hoff Sommers, in her essay "Persistent Myths in Feminist Scholarship" (The Chronicle Review, online edition, June 29), criticized Nancy K.D. Lemon, a lecturer in domestic-violence law at the University of California at Berkeley's School of Law, for publishing errors in the popular textbook she edits, Domestic Violence Law, and for not taking seriously her continuing criticisms of the book. "One reason that feminist scholarship contains hard-to-kill falsehoods is that reasonable, evidence-backed criticism is regarded as a personal attack," Sommers charged.

Here is a sample of what Sommers criticizes in Lemon's textbook:

"The history of women's abuse began over 2,700 years ago in the year 753 BC. It was during the reign of Romulus of Rome that wife abuse was accepted and condoned under the Laws of Chastisement. … The laws permitted a man to beat his wife with a rod or switch so long as its circumference was no greater than the girth of the base of the man's right thumb. The law became commonly know as 'The Rule of Thumb.' These laws established a tradition which was perpetuated in English Common Law in most of Europe."

Where to begin? How about with the fact that Romulus of Rome never existed. He is a figure in Roman mythology —the son of Mars, nursed by a wolf. Problem 2: The phrase "rule of thumb" did not originate with any law about wife beating, nor has anyone ever been able to locate any such law. It is now widely regarded as a myth, even among feminist professors.

Amazingly, Lemon persists in publishing these errors, even after they are pointed out to her. She does not even seem to grasp the concept that a university textbook should correct factual errors. She seems to think that Rome really was founded by the brothers Romulus and Remus, after being suckled by a wolf. Or that it is okay to cite a myth as if it were fact, I can't tell.

I got my PhD at U.C. Berkeley. I taught a class at U.C. Santa Cruz. I once had a slide that quoted a "rule of thumb". A boy came up to me after class and told me that I should never use that phrase because of its wife-beating origin. That was the first I had heard that there was any controversy about the word. So I looked it up, and found that the phrase had completely innocent origins. So I ignored him and figured it was an isolated case of a silly student with a silly idea. Now I think that I should have asked him whether he learned that in some sort of required diversity class where Lemon learned it, because maybe all the other students learned the same nonsense, and I could have corrected them.

These are fine universities, if you stay away from the feminists and other political crazies. Now I think that I live in a looney land. Barbara Sheehan's husband of 24 years was in the bathroom shaving, and she shot him with 11 shots from 2 different guns. How can anyone defend this verdict?

Update: A reader sends this Texas story to prove that husbands can also be acquitted of spousal murder.

There is a big difference. The Texas man was only released when DNA evidence proved that someone else committed the murder, and the husband is only being released after serving 25 years in prison.
Posted by George at 8:00 AM

Everything you said is true, and you didn't call her "professor lesbian".

no idea if KD is some sort of shorthand in the lesbian world, but at least kd lang has contributed positively to the world and made it better through her incredible voice and musicianship. Not sure I agree w/her anti-meat stance but as a former ranch hand up in Alberta she's entitled to her opinion there.

The people at UCSC's Women's Studies dept seem to generate a lot of hatred and just plain bad reasoning behind it so I'd say this KD is not in the same league as Ms. lang.......

You have the right Heather Warnken.