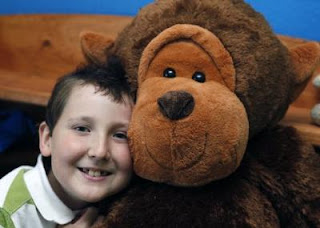 SAN JOSE -- Misha Byrne wants to spend his final moments in his special room, among his video game heroes and kittens.

After battling leukemia for four years, doctors told his parents earlier this month that their 10-year-old has just weeks, maybe months, to live. A bone-marrow transplant three years ago put his cancer into remission, but it returned in October 2010 and has slowly taken its toll.
For the past seven months, Misha has found comfort in the dream bedroom he received from Special Spaces Bay Area, a San Ramon-based nonprofit that remakes bedrooms for children with life-threatening illnesses. Misha was the chapter's first project.
He has told his parents he wants to die there, said his dad, Brendan Byrne. ...

The room has been bittersweet for Misha's parents. They are happy he has his special room to retreat to, and that he no longer is in and out of the hospital, but they wish there were more options for Misha.

Bittersweet for Misha's parents??! Is this some kind of sick joke?

The article fails to mention that Misha only gets to see his mom in supervised visits.
Before the leukemia was diagnosed, the mom was accused of child abuse based on some bruises, and the boy was taken away from her. What they apparently did not realize was that excessive bruising is a common symptom of leukemia.

When the diagnosis was made, no one was willing to admit the erroneous accusation. Instead they doubled down. They got a schlock lawyer-psychologist to write a bogus affidavit:

3. I have conducted more than a thousand evaluations including psychological and child custody evaluations for Family Court in Santa Clara County. ...

6. ... Ms. See-the-son did not have adequate information to determine if the Personality Disorder Not Otherwise Specified (with Borderline, Narcissistic and Dependent features) diagnosed by Dr. Pushy nearly five years ago had ameliorated and/or no longer remained problematic for Ms. Choosy's ability to parent. ...

8. Personality Disorders do not typically ameliorate merely with time. Often intensive psychotherapy over a prolonged course of care is necessary to effectively treat these conditions. I have reviewed no information that indicates that Ms. Choosy has engaged in such treatment efforts or that her Personality Disorder has ameliorated.

9. Personality Disorders can negatively impact an individual's ability to appropriately and effectively parent a child or children. Personality Disorder features such as those identified by Dr. Pushy, including instability in relationships, marked impulsivity, grandiosity, lack of empathy, and excessive need to be taken care of can significantly impair parent-child relationships and raise the potential of health and safety issues. Such features can negatively impact a parent's ability to promote positive psychological development for a child.

10. There remains evidence to suggest that Personality Disorder continues to be an appropriate diagnosis for Ms. Choosy in that she demonstrated problems accepting supervision provided by Ms. Bitchy Bagboy of TLC.

The mom is a Russian immigrant who reared her son from birth, and she does have problems accepting the malicious limits on her seeing her dying son. She has spent all of her time, money, and energy for the last 5 years trying to see her boy, and all she gets is supervised visits.

The above lawyer-psychologist is not Jewish, as far as I know, and as one of my persistent commenters will probably point out. He prefers to call these people "just greedy court personnel, who may happen to be of certain faiths, and occupations." No, I say that the term "just greedy court personnel" is insufficient. That is like describing a serial killer as a scofflaw who just happens to kill people.

The officials in this case are evil and destructive. Even if we assume that the mom might have a personality that could include "instability in relationships, marked impulsivity, grandiosity, lack of empathy, and excessive need to be taken care of", how does that justify preventing her from seeing her dying son? It takes much more than greed to write an affidavit like that. It takes a callous and anti-family ideologue with an almost-criminal disregard for human life.

"I despise Perlmutter for what he's done to your, and other families, and his influence. Really, I do." It's true that I believe that it's their greed that drives them to do these horrific things to kids and families.

I've been trying to make the point that I don't feel that they are driven by any ideological or religious beliefs, "just" greed driven. I'm speaking to their motivation, not the degree of impact of their offenses.

We've discussed how these court psych.s are graduates of offshore diploma factory univ.s, that teach night school, have horrible ratings, advertise in the yellow pages, can't attract patients /clients and must rely on the court referrals for their livelihood.

A heroin dealer doesn't have ideological or religious beliefs that motivate him to destroy lives, he's doing it out of greed, and doesn't care.

Prescription painkillers are now causing more deaths than heroin and cocaine combined. These prescribing doctors are no better, and are destroying lives. You don't think their actions stem from some ideology, do you ? I think it stems "just" from greed.

The drug seller can tell himself that responsible people ought to be able to use drugs appropriately. The professional man who goes out of his way to cite bogus psychology in order to prevent a mom from seeing her dying son is on a higher scale of evil. It requires a willfulness that is probably not present in the drug dealer or prescriber.

Maybe, but, "responsible people ought to be able to use drugs appropriately."

The heroin dealer knows that heroin is 100% addictive and can't be used responsibly, and has nothing to cite. The over prescriber of opiates, certainly KNOWS this to be true.

If we were talking about a Dr. or dealer selling or prescribing pot, I'd agree with you.

Higher or lower scale of evil ? My point is still that their motivation is still the same. People can go way out of their way to ratonalize their greed and evil, without any ideological basis being involved.

I'll give you this though, the heroin dealer, most likely has fewer oportunities to earn a living without having the 7 or 8 years of education that the Dr. or Psych, has, making their evil less of a product of necessity and more out of greed and evil.
It's not ideologically driven.

I don't know the answer, George, but who is more evil to your child/family, the court Psych. or the heroin dealer pushing heroin on your child ?

Maybe my, or our point, is that the court Psych. is a "respected", overpaid "doctor", who's trusted to do what's in BIOTC. The heroin dealer ends up in jail for a long time when caught, huh ?

Sad. The Psych.s deeds are being SUPPORTD, by the "law".

I don't know who's right about who's "more evil". It's Tragic that we can make such comparisons.

One way to test ideology is to look for other evidence of what they believe. Do they attend church on Sunday? Do they vote for or against pro-family politicians? Do they give detailed arguments to support what they do? Are the arguments based on data or ideology?

You make logical points, and I believe that you're a person who practices what they preach. A lot of church and temple attendees frequently "talk the talk but don't walk the walk."

Given the overall, voting statistics in S.C. county, I suppose we can generalize and make some assumptions about people's secret voting habits, too.

If a whore prays or doesn't work on Sabbath or Sunday, are they ideological ? Maybe they're greedy, and a fraud. Maybe they're compensating.

You're right about Perlmutter and Bret Johnson's arguments lacking any detail or data. I got the impression that these two argued in a fashion to simply antagonize you and protract the deadful ordeal.

I think that had you been a leftist, anti family, anti Chrsitian, Gay, feminist Jew, you'd have faced the same fate wth these guys.

I don't agree with you, but that doesn't mean you're wrong.

Perlmutter and Johnson demonstrated an anti-family maliciousness that was far and above what they needed to collect fees from me. Perlmutter wrote his report after he had been paid in full. That is why mere greediness does not explain his behavior.

I understand what you're saying and maybe you're right.

I look at it more as though Perlmutter, Johnson, the judge, CPS, etc. are working in concert for profit.

It appeared to me that they displayed a deliberately, exaggerated bias against you, by design, that would induce you to return for more, and generate demand.

Johnson's b.s. eval. appeared to set the stage for another eval.

Yeah, Perlmutter was paid first, but then paid again to come into court, because of the report. Or no ? Am I right ? Or am I mixed up about this ?

Not sure about this, but didn't Perlmutter "suggest" another re eval. in 6 or 9 months, too ? After he'd been paid ?

Maybe I'm giving them too much credit, but I see them as bias, and stupid, like a fox. I think it's theatre, acted out within a den of thieves.

What they're doing to you and your kids is horrific and personal, but I don't think that you should take it personally. Not that that should make you feel any better about it, of course.

I don't get your point here. Is there some reason that I should not criticize the motives of those who testified against me seeing my kids?

According to an Urban Institute study, less than one in 20 non-custodial parents who suffer substantial income drops are able to get courts to reduce their child support payments.

Does this suggest that it's about greed ? Over 95%, received the same result.

Seems like if the court prof.s were ideologically driven, they'd have to "favor" more than 5% ? vs. handing out virtually, equal justice/injustice accross the board.

Yeah,it doesn't prove anything, but a shocking statistic, huh ? What do you interpret from it ?

It suggests an anti-father ideology to me.

Good answer, but I'd guess that if women outearned men, there would appear to be an anti mother ideology.

Too bad the study didn't breakdown the non custodial parents into men vs. women, and how each gender fared.

You're a complete idiot. You weren't part of this case and no nothing beyond the stuff you read about it.

You fail to tell people all the facts, just twists the parts that fit your outrage about your own situation.

I do know Misha's step mother. I have for roughly 30 years now. For you to use Misha as a soapbox for your own failings as a father and a man is simply disgusting.

It's time for you to grow up. If you are so wronged by courts work to prove it instead of being any internet bully.

If I missed some important fact, then go ahead and post it here.