Bad to put 7yo in charge 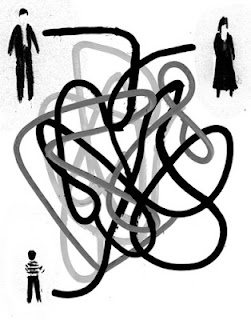 I mentioned below a goofy NY Times proposal to decide child custody cases. It drew these letters, explaining the foolishness better than I did:

Ruth Bettelheim advocates a mandated review of child custody plans every two years, including a recorded interview of the child speaking privately with a mediator-lawyer who will report his or her concerns. This is meant to advance children’s rights, helping children who are powerless to voice their changing needs without fear or guilt.

Regulating parenting in this way would amount to an unjustified intrusion on family life. It’s also misguided, sure to backfire.

Can there be anything more damaging to children already affected by divorce than forcing them to talk about it with an official, one with authority over the child’s family?

Although couched in terms that would allow a child to decline, something like a Miranda warning, there’s no guarantee that preteenage children or adolescents would understand or exercise that option. The potential damage to children outweighs the possible benefit of any complaints they might make about the schedule imposed by a custody agreement.

There’s no shortage of serious issues facing children and families that wind up in the legal system; let overburdened courts focus on them.

The writer is a lawyer concentrating in education and family law.

It’s hard to know where to start disagreeing with Ruth Bettelheim’s idea of letting kids as young as 7 redesign their custody arrangements every two years.

Is it the creation of a new legal bureaucracy that attempts to discern the wishes of millions of children? Is it the emotional abuse of forcing kids to decide whom they love better — Mommy or Daddy — every two years? Is it the fact that every disciplinary act would carry the threat of a child choosing the more permissive parent the next time around?

Dr. Bettelheim says 7-year-olds are the “ultimate experts” on their own lives. Perhaps we should let them decide if they want to go to school, too?

We need to put an end to govt official and supposed experts micromanaging families.

Update: There are more comments here.
Posted by George at 8:00 AM

Your call for govt. to stay out of family management is fairly ludicrous given that we live in a society in which the majority apparently thinks it reasonable for the Pope to micromanage peoples' sex lives!

The Pope does not micromanage anyone's life, and never has. He gives spiritual advice. You can take it or leave it.

Such a nice information providing here about Divorce. Divorce doesn't just affect the couple and the kids, but involves everyone in the family.