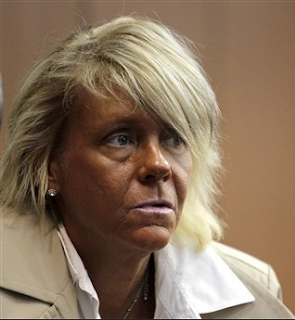 NEWARK, N.J. -- A deeply tanned New Jersey mother accused of causing skin burns to her young daughter by taking her into a tanning booth pleaded not guilty Wednesday to a child endangerment charge, and the tanning salon's owner appeared to corroborate her story.

Patricia Krentcil faces a second-degree child endangerment charge. Through her attorney, she pleaded not guilty in Newark Municipal Court on Wednesday morning. Krentcil is free on $2,500 cash bond.

Before Wednesday's court hearing, Krentcil, whose skin has a deep bronze color from regular visits to the tanning salon, called the accusation a lie. ...

The owner of City Tropics Salon in Nutley, who only identified himself as Anthony, said employees who were there on the day in question told him the girl remained outside with her father and brother and didn't go into the tanning booth while Krentcil was inside.

He said a sign is posted in the salon that refers to New Jersey state law barring anyone under 14 from using a tanning salon.

I am siding with this freaky mom. 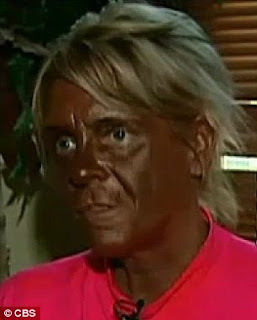 A recurring theme on this blog is that it is wrong and destructive for CPS, cops, teachers, and others to get involved 2nd-guessing parents when there are already laws addressing the matter.

In this case, there is apparently a law against putting a 5yo girl in a tanning booth. If that law were violated, the appropriate remedy is to shut down the tanning salon. My guess is that the salon does not dare risk its license by tanning a 5yo girl.

There is no mention of a father. (Correction: A comment below says the husband defends his wife.) If it were me, I wouldn't want my wife or my daughter going to one of those tanning salons. The woman looks like a monster. But the NJ legislature has decided that it is okay for kids over 14, and illegal under 14. I have no idea what considerations went into that age cutoff, but that's the law. Beyond that, it is nobody's business. It is not up to CPS agents, prosecutors, or anyone else to decide what appropriate tanning is.
Posted by George at 1:00 PM

Patricia Krentcil's husband spoke out in defense of Patricia: "She enjoys tanning, that’s just a thing she does. She’s being judged way too harshly. The real truth will come out." Also: "...the New Jersey salon where Krentcil tans has revoked her license."