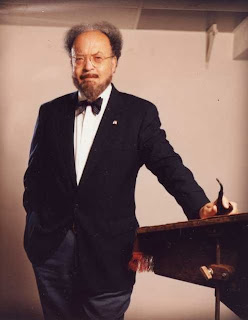 Here is a NY Times obituary:


Theodore Millon, a psychologist whose theories helped define how scientists think about personality and its disorders, and who developed a widely used measure to analyze character traits, died on Wednesday at his home in Greenville Township, N.Y. He was 85. ...

Dr. Millon (pronounced “Milan,” like the city in Italy) learned about the oddities of personality at first hand, by wandering the halls of Allentown State Hospital, a mental institution, after being named to the hospital’s board in the 1950s as a part an overhaul effort in Pennsylvania. ...

At the University of Illinois in the 1970s, he began to think and write more deeply about the patterns underlying specific character types that therapists had described: the narcissist, with fragile, grandiose self-approval; the dependent, with smothering clinginess; the histrionic, always in the thick of some drama, desperate to be the center of attention. By 1980, he had pulled together the bulk of the work on such so-called personality disorders, most of it descriptive, and turned it into a set of 10 standardized types for the American Psychiatric Association’s third diagnostic manual.

Along the way he developed the Millon Clinical Multiaxial Inventory (MCMI), which became the most commonly used diagnostic assessment for personality problems. It is still widely used today, in its third edition, the MCMI-III.

Pronounced like the city in Italy? What help is that? I thought that I knew how to pronounce Turin, but then they had the Olympics there, and all the TV announcers pronounced it with an extra syllable.

I had to get a Millon Clinical Multiaxial Inventory-III (MCMI-III) test for the family court. It is probably the leading competitor to the better known Minnesota Multiphasic Personality Inventory. It has 175 true/false questions, as opposed to 567 for the MMPI-2. Some are silly, like:


65.I flew across the Atlantic 30 times last year.
110.I was on the front cover of several magazines last year.
157.I have not seen a car in the last ten years.

The purpose of these is to catch people who are just answering randomly. If you really were on the covers of magazines, then you might be falsely flagged as a malingerer or something. But the test has large error rates anyway, so that possibility can be ignored.

Others obviously indicate serious problems, such as:


118.There have been times when I couldn't get through the day without some street drugs.
171.I have given serious thought recently to doing away with myself.

Many are dubious, such as:


63.Many people have been spying into my private life for years.

Of course, the NSA, Google, and Facebook have been spying on your private life for years. But if you answer true, you will be flagged as paranoid.

The test is supposed to detect DSM-IV disorders:


A part of the MCMI-III is based upon Millon’s theory of personality, as illustrated in the following 15 personality styles and subtypes:

None of the questions have anything to do with parenting. A parent could be shy or dependent or antisocial or compulsive or even paranoid, and there is not necessarily any negative effect on kids. There is no law or public policy that kids are to be taken away from such people.

The closest connection I can find is the similarity between the Millon antisocial personality disorder subtypes and the Tiger Mom theory of why Chinese and Jews are better than everyone else. Some antisocial behavior can be profitable, I guess.

The test may have some useful purposes, but for the family court, it is just voodoo.

The complete list of questions, and scoring rules, is kept super-secret, and available only to licensed psychologists who pay the fees. By posting a few questions, I risk a take-down demand from the publisher.

Millon was Jewish, just like many other leaders of psychology in the 20th century. They are making their own value judgments based on their own values, not Christian values, and imposing them on parents in the family court.

If the family court were appointing Haitian witch doctors to use Voodoo to decide child custody, then I would be complaining about the prejudices of Haitian witch doctors. Instead they hire gay and Jewish psychologists to do stupid personality quizzes.
Posted by George at 8:00 AM

and once again, jews are behind the destruction of the west. jews created feminism, jews created psychiatry, which is another weapon against whites, etc.

America started dying the day we went and fought against our savior, Adolf Hitler.

I's got nothing to do with race. The phychs are working for Xenu.

George, I love your blog. Anecdotally I must add, my 13 year old son was administered the test and it was SPOT ON. It was mind blowing to me because I thought this test was BS.

You're getting the kind of following you deserve with the neo nazi, devilworshippers.