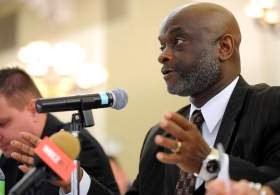 Chicago is famous for corruption, and a reader sends this story that CPS is no exception:


Gov. Pat Quinn’s new director of the Illinois Department of Children and Family Services pleaded guilty to stealing from clients of a West Side social service agency and later became embroiled in a child-support battle over a daughter he said he never knew he’d fathered, records show.

Arthur D. Bishop, 61, had a felony theft charge pending against him when then-Gov. Jim Edgar’s administration hired him as a DCFS caseworker in 1995. He’d been accused of bilking patients of the Bobby E. Wright Comprehensive Community Mental Health Center out of more than $9,000, fighting the case for more than two years before pleading guilty to a reduced charge of misdemeanor theft.

Court records also show a paternity case was filed against Bishop in 2003, when he was a DCFS deputy director. DNA tests showed he was the father of Erica Bishop, then 17.

Bishop, who was married to another woman when Erica was born, “denies his own daughter’s existence when he knows in his heart of hearts that he visited us on numerous occasions at my parents’ house when she was a child,” O’Connor said in a December 2003 court filing. Bishop “even asked me if he could live in with me if his wife put him out after she learned the truth. . . . All I want is for [Bishop] to just be a man about the situation and take responsibility for his child.” ...

Before his career in state government, Bishop was a substance-abuse counselor at the Bobby E. Wright center. According to his Sept. 17, 1993, arrest report, he received $9,262 from clients and failed to turn over that money to the center between May 5, 1992, and July 23, 1993.

Bishop created a “bogus” program for convicted drunken drivers, said Lucy Lang-Chappell, former executive director of the center, who was his boss. He was improperly taking money from patients and providing them with forms they wrongly believed would allow them to get their driver’s licenses back, though the center wasn’t licensed by the state to provide that service at the time, Chappell said in an interview.

I hate to pile on here. 4 of the last 7 Illinois governors have been sent to prison. Democrats have taken over the state, and the current governor is black. Politics may have required him to appoint an incompetent black man to head CPS. Maybe you cannot get a good man to take charge of taking kids away from parents. Even a Republican challenger has a weird gay sex harassment claim against him. Maybe it is not reasonable to expect a black man to know what kids he has fathered, or to have a clean police record.
Posted by George at 8:00 AM

My mistake. I misread the story caption. Thanks.

He says that he hates to 'pile on'. Seems like he loves to pile on everyone but the Gay, child molesting, Catholic priests.

I hope that the child molesters are tried, convicted, and sent to prison.