Dad loses kid and is gagged, for 2nd medical opinion

CPS took custody of a 15yo daughter when two hospitals disagreed about a diagnosis. Now the dad is violating court orders to speak out:


Justina Pelletier’s father Lou broke the gag order issued in his daughters’ case in an effort to garner public support and help bring the 15-year-old home. Lou Pelletier sat down with Glenn Beck for an interview about his daughter’s “kidnapping” earlier this week.

The teenager has been withheld from her family since a hospital took custody of the girl. The parents’ “crime?” Disagreeing with the doctor’s diagnosis. Justina’s parents are currently permitted to visit her just once per week for a single hour and can make just two phone calls during that same time period.


The Massachusetts Department of Children and Families (DCF) has filed a motion for Lou Pelletier, the father of 15-year-old Justina Pelletier, to be held in contempt of court sources tell FOX CT News.

Justina Pelletier is at the center of an ongoing legal custody battle between the State of Massachusetts and her parents in Connecticut.

She’s been away from her parents and under Massachusetts state custody since Feb. 14, 2013.

Judge Joseph Johnston issued a gag order on Nov. 7, 2013 when FOX CT was outside the courtroom asking questions.

There are many things wrong here. First, there can be a legitimate difference of opinion about a diagnosis, but such a difference is not a criminal matter. 2nd, the parents got into trouble by asking for a second opinion, and that should never be punished. 3rd, the kid is old enough to have some say about her treatment, and CPS has no business interfering.

But what is most outrageous about this story is that it has been reported in the general press for almost a year, including the London press in Nov. 2013, and the dad should certainly be able to publicly defend himself against charges that he is abusing his daughter. And he certainly should be able to tell his daughter, now 16yo, that her medical treatment is directly contrary to what the other physicians had recommended.

This was on the Fox News Kelly File yesterday evening, with the dad giving an interview in violation of the gag order. It seems to me that he is very clearly within his constitutional rights. 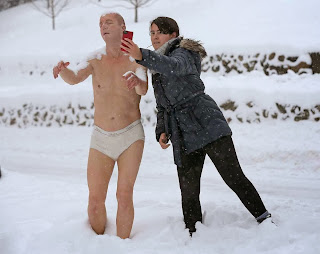 They have a funny idea of free speech in Boston. In other news:


The president of Wellesley College announced today that the college will definitively keep the Sleepwalker statue where it stands until the end of the temporary exhibit this spring.

The realistic-looking statue of a man sleepwalking in his underwear near the center of Wellesley College created a stir among the women on campus earlier this month, especially as hundreds of students at the all-women's college signed a petition asking administrators to remove it.

But Wellesley College President H. Kim Bottomly said in an internal communication to the school community Thursday that after weighing many perspectives, she decided that “we cannot destroy the artistic integrity of this exhibition by moving the sculpture, and also, we must do everything we can to support those students who find themselves deeply affected by it.”

Its not a free speech issue. If a judge issues a gag order, you are violating a court order. If you feel a gag order is unfair, you appeal the gag order.

Once the judge has ruled, the gag order is removed and you can comment on your legitimate differences of opinion.

No, you have a constitutional free speech right to tell your story, without needing to get permission from a judge. That has been the law in the USA for over 200 years.

Technically, you are right you do continue to have a free speech right.

However, practically, you are being prosecuted for contempt of court or willfully disobeying a court order. which leads to fines and jail.

If a judge tells you to shut up, you actually do need permission from another judge or else the government may act against you for what you said.

BUT the workaround is to get a reporter to report your story off the record there is not evidence that you violated the order.

Parents need to arrange for Justin a to get married to escape the CPS stranglehold..
In South Carolina a 16 year ld can marry without judical over site with oarental consent.
Out smart those tyrants.