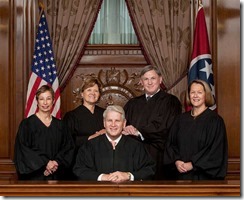 
Grandparents in Tennessee will be able to see their grandchildren more easily because of a ruling Friday by the Tennessee Supreme Court.

The unanimous ruling clarified the standard that grandparents must meet when they want to modify details of court-approved visits with grandchildren. The ruling especially affects cases in which grandparents seek to maintain relationships after parents divorce or adopt.

Grandparents will have to show that altering a visitation plan would be in the child’s “best interest” — a lower standard than they had to meet in the past. Previously, grandparents had to prove that a “substantial risk” of harm would result if the changes were not made.

The BIOTCh (“best interest”) is no standard at all. It just means letting the judge apply his personal prejudices.

After I temporarily lost custody of my kids, my mom asked the court for visitation. After all, she reasoned, no one had shown that she did anything wrong, and it wasn't fair that she was being cut out of the lives of her grandkids.

From my point of view, no one had shown that I did anything wrong either. No witness or judge ever said that I was an unfit parent. Every decision against me was grounded in the BIOTCh theory that the judge can change custody without any proof of wrongdoing, and can be just an opinion about what is best.

The judge left it in the discretion of Julie Travers, and she swore that she would never permit my mom to see the kids ever again.


Attorneys said Tennessee law gives parents superior rights to grandparents but allows grandparents to seek visitation through the courts. But the law doesn’t say much about situations in which grandparents want to adjust visitation, leading three appeals court judges to write differing opinions.

The Supreme Court justices, addressed the families involved, saying they did not condone the uncooperative relationship that had formed between the parents and grandparents, and urged both families to “refocus on how best to foster the welfare of the child.”

I wonder if the judges even realize how self-defeating their opinions are. They make it impossible for the parents and grandparents to do what the court is urging them to do.


Ronald H. Coase, whose insights about why companies work and when government regulation is unnecessary earned him a Nobel Memorial Prize in Economic Science in 1991, died on Monday in Chicago. He was 102.

His death was announced by the University of Chicago.

By his own description, Professor Coase (rhymes with doze) was an “accidental” economist who spent most of his career teaching at the University of Chicago Law School and not its economics department. Yet he is best known for two papers that are counted among the most influential in the modern history of the science. ...

In the second of his groundbreaking papers, “The Problem of Social Cost,” published in 1960, Professor Coase challenged the idea that the only way to restrain people and companies from behaving in ways that harmed others was through government intervention. He argued that if there were no transaction costs, the affected parties could negotiate and settle conflicts privately to their mutual benefit, and that fostering such settlements might make more economic sense than pre-empting them with regulations.

The paper made the idea of property rights fundamental to understanding the role of regulation in the economy. ...

While teaching at Virginia, Professor Coase submitted his essay about the F.C.C. to The Journal of Law and Economics, a new periodical at the University of Chicago. The astonished faculty there wondered, according to one of their number, George J. Stigler, “how so fine an economist could make such an obvious mistake.” They invited Professor Coase to dine at the home of Aaron Director, the founder of the journal, and explain his views to a group that included Milton Friedman and several other Nobel laureates-to-be.

“In the course of two hours of argument, the vote went from 20 against and one for Coase, to 21 for Coase,” Professor Stigler later wrote. “What an exhilarating event! I lamented afterward that we had not had the clairvoyance to tape it.” Professor Coase was asked to expand on the ideas in that essay for the journal. The result was “The Problem of Social Cost.”

At the heart of Coase's paper is the simple observation that conflicted parties can negotiate agreements to their mutual benefit if their rights under the law are defined in advance.

It is too bad that we don't have a tape of those 20 distinguished professors denouncing Coase. The Coase theorem is considered so obvious today, that it would be illuminating to see what their misconception was.

These judges have made it impossible for the parents and grandparents to negotiate and agreement, because their rights are not defined.

Whatever the misconception, the Tennessee court seems to suffer from a similar one. Their decision says that any agreement can be reversed by some foolish family judge's opinion of the BIOTCh. So no rights are defined, and no agreements are enforceable. Everyone is always at the mercy of a judge.


Our decision to grant this relief should in no way be understood as condoning the acrimonious and uncooperative relationship that has existed between the Copleys and the Lovlaces or suggesting that their future willful failure to abide by the visitation arrangement in the January 5, 2011 order will not result in serious consequences. Their hostility towards each other and unwillingness to work together has resulted in each side incurring thousands of dollars of attorney’s fees, in addition to the emotional turmoil this litigation ha s undoubtedly produced. Unfortunately, the record on appeal suggests that the Copleys and the Lovlaces have lost sight of the fact that the paramount consideration in this case, as well as all other legal proceedings involving child custody and visitation, is the welf are of the child. Luke v. Luke, 651 S.W.2d 219, 221(Tenn.1983). The interests and desires of adult parties are secondary to this par amount concern. Boyer, 238 S.W.3d at 255; Dantzler v. Dantzler, 665 S.W.2d 385, 387 (Tenn. Ct. App. 1983). We urge the Copleys and the Lovlaces to refocus on how best to foster the welfare of the child they all dearly love and allow this goal to guide their future interactions with each other.

It is disgusting to blame the parties for bringing their case to court, when the central holding of the decision is that no out-of-court agreement is enforceable.

These judges are completely ignorant of law and economics:


Modern law and economics dates from about 1960, when Ronald Coase (who later received a Nobel Prize) published “The Problem of Social Cost.”

How does anyone get to the state supreme court without understanding freshman-leval legal knowledge? I realize that appointments are political, but surely there are some lawyers in Tennessee that understand this. They can't all be Appalachian hillbillies.
Posted by George at 8:00 AM