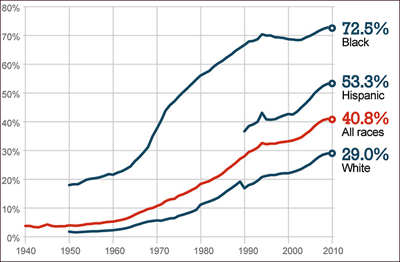 Single moms are ruining the world, but not even the Pope is willing to say so anymore. The news media is full of praise for our
non-judgmental pope:


After a series of “spontaneous” phone calls made to Catholics who have written to him, the press have dubbed Francis the “cold call Pope.” The latest call by this populist Pope to unwed mother-to-be Anna Romano, 35, seemed to me particularly insulting to serious, intelligent Catholic.

The supposedly distraught Anna Romano, who was living in a scandalous relationship with a man in the town of Arezzo, near Florence, wrote a letter to the Pope explaining her situation: a divorced woman who was “unlucky with men” and had been through several relationships. Now she was pregnant and had “discovered” that the “man of her dreams,” who is the father of the baby, is already married and has a child.

"He left me, telling me he had no intention of taking care of the baby," she said. The man also told her to have an abortion, which she chose not to do.

Now, “in a desperate and anguished state,” she was addressing the Pope because she had no one else to turn to. Then she went on to explain that she feared no priest would baptize her illegitimate child.

The Pope responded by picking up the phone and calling Miss Romano."The Pope told me I was very brave and strong to decide to keep my baby," she said, describing the unexpected call. He also assured her that he would be her spiritual father and baptize the illegitimate baby.

No, a 35yo woman who goes around seducing married men and getting pregnant is not "unlucky with men". She is a menace to society.

Illegitimate kids are baptized all the time. The Pope should have told her to confess her sins and give up the child for adoption. The Church has a long history of running adoption services. This women can be forgiven but they have to confess their sins.

At least the Catholics are still sponsoring tattoo removal in Santa Cruz. And the Pope denies saying that homosexuality does not matter.
Posted by George at 8:00 AM

Mo babies, mo Catholics. Of course the Pope supports those children (in spirit). Same goes for Pres. Obama -- while he proclaimed his legitimacy as a native-born American, of course he favors an open-door policy for illegal aliens (future Democrats).

The Catholic Church is clear that sex outside of marriage is a sin, adultery is a sin, etc.

Right, the single moms are not the ones who are faithful to Catholic doctrine.


Pope Francis is getting tons of press about how liberal he is and its amusing because the core beliefs of the Catholic Church have not changed.

Pope Francis is reminding Catholics that God calls us to do 2 things - love God and love your neighbor. and that all the rules and all the other stuff MUST be done with those two things in mind or else they are worthless.

Sex outside of marriage and adultery are grave sins, the Pope knows that, Catholics know that. However, God doesnt call us to smack down single mothers or gay people or label sinners. and the Pope is reminding us of that.

and he is reminding us that maybe we, as catholics, freak out about sex more than money and Christ gives us far more warnings about money than sex. Christ says it is dangerous to just be a rich man in terms of reaching heaven.

You are right that the Pope is not actually deviating from core beliefs, as far as I know.