Picture of boy with gun 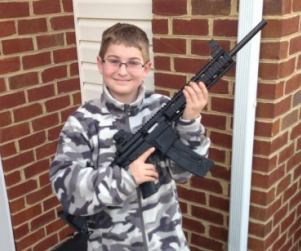 
The father of an 11-year-old took a picture of him holding a .22 rifle and posted it on Facebook. Shortly after, an anonymous call was made to New Jersey’s Department of Youth and Family Services, and they showed up at the father’s door demanding to see his firearms or else they would take the child.

Shawn Moore posted on a pro-Second Amendment forum detailing the experience. Moore said two representatives from the state’s social services came to his house on the night of March 15 with four police officers.

They said they were responding to a call about a young boy holding a firearm, and without a search warrant, demanded to see his firearms. Though Moore was not initially there, his wife called him and talked to him throughout until he was able to arrive at the home.

They also called their lawyer, who listened to the exchange between the DYFS, police and Moore’s family. His lawyer told Moore to deny entry to the DYFS.

After he told them they could not enter, a DYFS representative threatened to take his children. When Moore asked for her name, she refused to give it to him and soon left “empty handed and seeing nothing.” ...

Apparently, the DYFS representative wanted access to the house and gun safe so that she could make sure they were catalogued and “properly registered,” though New Jersey does not require registration.

This is just CPS harassment and intimidation. Why does it matter what guns are in the gun safe?

There are people who believe in tighter gun regulation, but CPS has no authority to just invent their own gun policies.
Posted by George at 8:00 AM