Time for Santa Cruz to pick a new slogan

I have to say it. I cannot stand the slogan "keep Santa Cruz weird." It reminds me of the 1960s. We dressed differently, grew out our hair, used drugs, protested anything and everything, lived in communes, loved everyone and were considered weird. ...

Years ago I used to work in downtown Santa Cruz and knew may of our transients by sight and some by name. As time went on, a new, aggressive group of transients began moving in and downtown began feeling very unsafe to me.

Seven years ago, holding my 6-month-old, I was aggressively accosted by a panhandler wielding a machete who got angry with me for not giving him money. That is when I attended my first Santa Cruz City Council meeting ...

Wondering about crime and weirdness in Santa Cruz? I mentioned a false campus rape claim, and now the newspaper has more details:


Triplett broke up with a boyfriend Feb. 16 and posted ads twice on
Craigslist that day for someone to harm her, prosecutors said.

"I am looking for a gun owner to shoot me in the arm/shoulder with the smallest caliber bullet possible," according to the post, which was quoted in court records. "No charges will be filed and I am willing to compensate you. I need this to happen tonight, Feb. 16."

A second post that night, titled "Seeking Strong Hand," said she wanted someone to "beat me up," including "punches, bruises and kicks."

Several men replied and a man came to the UCSC campus on Feb. 17. Triplett had been at UCSC to attend a Lesbian Gay Bisexual Transgender conference, prosecutors said.

Schonfield said Triplett met the man on campus and he agreed to beat her in exchange for sex.

"They had sex and afterwards she used a cellphone screen reflection as a mirror to see if the injuries were bad enough and then directed him to hit her some more," according to court records.

The man left and Triplett called 911, saying that she was looking for banana slugs on a path when a man attacked and raped her.

They probably taught her some crazy things at the UCSC LGBT conference, but at least she had the decency to keep her word with the man.

We really have girls who wander off into the woods looking for banana slugs, so that is not as weird as it sounds. The DA asked the court to order her to stay off Craigslist, and not place any more personal ads of any kind. 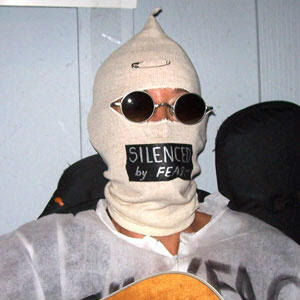 Meanwhile, a fold singer is being locked out of shows in some sort of diversity statement:


SANTA CRUZ, Calif. (AP) -- Her show had been cancelled, but that didn't stop alternative folk and rock singer Michelle Shocked from showing up at a Santa Cruz nightclub where she staged a sit-in with tape across her mouth that read "Silenced By Fear." ...

On Thursday night, she posted signs that read "Does speech scare you that much?" and on her back she had scrawled "Gimme Wit, Not Spit."

So they are shocked that someone named Shocked said something shocking? No, they are just intolerant leftoids who want to censor other points of view.
Posted by George at 8:00 AM

Good thing one of those crazy gun owners didn't respond to her.