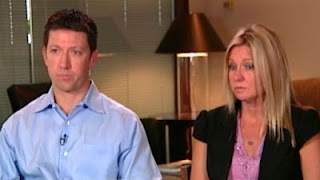 
In 2008, Lisa and Anthony "A.J." Demaree took their three young daughters on a trip to San Diego. They returned home to Arizona and brought photos of their then 5, 4 and 1 1/2 year old daughters to a local Walmart in Peoria to be developed.

That should have been that, except instead of receiving 144 happy familial memories, Walmart employees reported the Demarees to the Peoria Police Department on the suspicion that they had taken pornographic images of their children. The police, in turn, called in the Arizona Child Protective Services Agency, and the couple lost custody of their daughters for over a month.

They were shocked. "Some of the photos are bathtime photos," Lisa Demaree told ABC News at the time, "but there are a few after the bath. Three of the girls are naked, lying on a towel with their arms around each other, and we thought it was so cute."

A Maricopa County Superior Court judge ruled that the photographs were not, in fact, pornographic, and a medical exam revealed no signs of sexual abuse. The girls were returned to their parents.

But the damage had been done: The couple's named went on a central registry of sex offenders, and "We've missed a year of our children's lives as far as memories go," Demaree told ABC News.

In 2009, the couple sued the city of Peoria and the State Attorney General's office for defamation. They also sued Walmart for failing to tell them that they had an "unsuitable print policy" and could turn over photos to law enforcement without the customer's knowledge.

I hate to say it, but their lawsuits are a waste of time. The parents should just be happy that they stayed out of prison and got their kids back. Others have gotten worse.

The article says the parents went on the "central registry of sex offenders", but I think that is incorrect, because they were not convicted. They would be on the list of CPS-suspected child abusers. It is almost impossible to get off that list, because it is a fact that CPS once suspected them of abuse. Yes, CPS has a guilty-until-proven-innocent mentality.
Posted by George at 8:00 AM