Mutilation of the soul 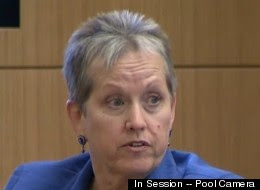 I thought that the psychologist defense expert was bad, but the domestic violence expert is ten times worse. She rambles on and on with anecdotes that have no grounding in recognized facts or obvious relation to issues at trial.

In one rare factual statement, she said that 80% of women making domestic violence accusations later recant. She gave no source. Originally she said that she "heard" it, bringing an objection. But she got to repeat it anyway, when it was couched in a discussion of her experience.

The obvious implication is that those 80% of the accusations are false. LaViolette seemed to imply that all accusations are true, but the accusers back out anyway. Maybe the truth is somewhere in between. But unless the expert has some objective data on this, she should not be testifying about it.

My guess is that most of the time, when the accuser sees the draconian domestic violence penalties in states like California, she decides that the original offense does not deserve those penalties. So in that sense the accusations are false. The authorities exaggerate the significance of the incident into a major crime, and the accuser decides that no such major crime was committed.


PHOENIX - A domestic violence expert is testifying in Jodi Arias' murder trial to explain for jurors the generalities of abusers and victims.

Psychotherapist Alyce LaViolette (la-VI'-oh-let) spent much of Tuesday testifying about how most victims of such abuse don't report it and rarely tell anyone because they feel ashamed and humiliated.

Arias faces a possible death sentence if convicted of first-degree murder in the 2008 killing of Travis Alexander in his suburban Phoenix home.

Authorities say she planned the attack on her lover in a jealous rage. Arias initially told authorities she had nothing to do with it then said it was self-defense.

Arias says Alexander grew physically abusive prior to his death, but no trial evidence has supported her claims.

Here is LaViolette making a rare reference to a publication:


Psychological-emotional-verbal abuse tend to create the mood in the relationship. But also it is happening more frequently, you know. There's articles on psychological-emotional abuse being “Mutilation of the soul”, for instance, there's an article on that. But they generally will tell you that that's terrible for them.

What article? I could not find it. Who is "they", and why does their opinion matter? How is this informing the jury of anything useful?

I am surprised that this sort of vague, imprecise rambling gets allowed as expert testimony.

Here is some testimony about Jodi:

Q. Does she have issues with her mother?

For LaViolette to be effective, she has to argue that very mild and subtle verbal language can be abusive. Based on the evidence, the most abusive thing the victim did was to call Jodi a "skank" in a private text message. It is going to be a big stretch to consider that an excuse for murder. The term skank may have been accurate. Here is how LaViolette describes her after telling a story about her willingness to give a blow job in a parking lot to a man she just met:

I believe that Miss Arias, and because of her family history, her boundaries were probably a little more fluid than some other peoples' boundaries at that point.

No, her family history did not make her a skank.
Posted by George at 8:00 AM

No worries. Ms. Arias will be either incarcerated for life or her life terminated. The defense is grasping to find some cause not to exercise the latter option. The defense's choice of Samuels and this nutcase 'expert' sadly is the best they could bring forward. These 'experts' do not care if they are honest or accurate. They are making between $250 - 300/hour to make asses out of themselves.

I have only been involved in one event where a murder was committed by someone I knew. Once someone commits murder, life gets very surreal. Took me several years to move past that event. I do not believe the murderer or the victim's family ever really returned to anything resembling normalcy.

I am most disgusted by the media circus and the attendant audience of gawking buffoons. A person has died horribly and the media is rampant for ratings with little regard for the families.