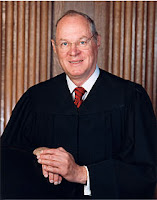 The LGBTQIA lobby is celebrating winning over the Supreme Court swing justice, such as in Time magazine's How Gay Marriage Won:


Charles Cooper was extolling heterosexual marriage as the best arrangement in which to raise children when Kennedy interjected: What about the roughly 40,000 children of gay and lesbian couples living in California? “They want their parents to have full recognition and full status,” Kennedy said. “The voice of those children is important in this case, don’t you think?”

Kennedy has misrepresented the evidence. We don't have that many kids wanting parental recognition. Kids do not have same-sex parents. They have moms and dads.

Here is the official oral argument:

On the other hand, there is an immediate legal injury or legal -- what could be a legal injury, and that's the voice of these children. There are some 40,000 children in California, according to the Red Brief, that live with same-sex parents, and they want their parents to have full recognition and full status. The voice of those children is important in this case, don't you think?

If the voice of those children is so important, then maybe they should have testified. A lot of kids live with one parent and one boyfriend/girlfriend acting as a step-parent, and they hate the acting step-parent. They do not want their parent to marry and make that person a step-parent.

Here is what the red brief (pdf) says:


Indeed, the only harms demonstrated in this record are the debilitating consequences Proposition 8 inflicts upon tens of thousands of California families, and the pain and indignity that discriminatory law causes the nearly 40,000 California children currently being raised by same-sex couples. ...

And because Proponents acknowledge “the undisputed truth that children suffer when procreation and childrearing take place outside stable family units,” Prop. Br. 37, they must also acknowledge that the undeniable effect of Proposition 8 is to cause “suffer[ing]” among the nearly 40,000 children in California being raised by gay and lesbian couples. See Pet. App. 238a. Indeed, Proponents’ principal expert testified that “adopting same-sex marriage would be likely to improve the well-being of gay and lesbian households and their children.” J.A. 903 (Blankenhorn).

David Blankenhorn is an advocate of same-sex marriage, so his opinion is not important here, as it is contrary to the Prop 8 supporters.

The point here is that the 40k kids are being raised by same-sex couples, not same-sex parents. In many cases, the child of a straight marriage ends up with a same-sex couple, after a divorce. For example, a wife will sue for divorce from her husband, make phony accusations of domestic violence, get child custody, and move in with a lesbian. The child still has two legal parents, the natural dad and mom. The child is not going to benefit from a lesbian wedding, as that may be just a device to further alienate the child from the dad.

Again, my concern here is not what LGBTQIA folks do in private. My concern is with anti-family laws and court rulings that make false presumptions about the interests of kids. Lesbian marriage is often just a legal device for cutting off kids from their dads. Justice Kennedy has misunderstood the 40k California kids.

Update: Maureen Dowd writes in the NY Times that Kennedy's comment was the high point of the oral argument:

Justice Anthony Kennedy had a single compassionate moment, mentioning the children whose gay parents were stuck in marital limbo.

No, there are no gay parents were stuck in marital limbo.
Posted by George at 8:00 AM

A hundred years ago, the U. S. Constitution was amended to provide for direct election of senators. Maybe it's time for direct election of Supreme Court judges. Folks would elect those who are aware of the most recent psychological and sociological studies and they would set enlightened public policy following extensive discussion in the media. There would be tremendous efficiencies in eliminating acts of Congress and initiatives like Proposition 8.