Dad charged for waving a gun 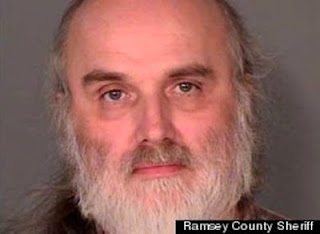 The Examiner reports on a dad who is a victim of anti-gun hysteria:

A Minnesota man supposedly pointed an AK-47 rifle at his daughter because she received two B’s in school. Kirill Bartashevitch, 51, wanted his daughter to earn straight A’s on her report case, but flipped out when that did not happen.

The two of them started arguing about the report card on January 13, and that was when Bartashevitch aimed his rifle at his 15-year-old daughter.

A social worker at the girl's high school contacted police about the situation on Jan. 17, according to KMSP. “The social worker said the girl had sent a text message to a friend of hers about the incident. The friend's mother had seen the message and told the social worker about it.” ...

“The man allegedly admitted to pointing the gun at this family, but added that he had checked the chamber beforehand to make sure it was not loaded.”

The daughter told police she was fearless because she was aware the gun was not loaded. “The daughter was taken to a shelter, and Bartashevitch was charged with two counts of terroristic threats.”

This is not a terrorist threat, or even a terroristic threat. It was not even an AK-47. A true AK-47 is a Soviet military assault rifle with automatic fire. The ones sold in the USA require one trigger pull per shot.

If the daughter understood that the gun was not loaded, then it was not a threat. The prosecutor explains the law wrong:

Bartashevitch had recently purchased the rifle because he thought that such guns soon will be banned, the complaint said. He admitted to St. Paul police that he had pointed the gun at his wife and daughter but said it wasn't loaded and that he had checked the chamber beforehand.

Threatening someone with a gun is a crime of violence regardless of the type of weapon or whether it's loaded, Choi said. The incident took place at the family's house on Englewood Avenue. The girl's concerns came to light four days later at Central High School when a social worker received a report from a parent who was monitoring her son's electronic communications and read a message from the girl.

No, this is incorrect. You can commit a crime with a toy squirt gun, if you use it to rob a bank and convince others that it is a real gun and you are threatening to kill them with it. So yes, you can commit a crime with an unloaded gun. But it was obvious to everyone that the dad was not intending to kill the daughter with the gun. If he were intending to kill her, he had four days to do it before the authorities intervened.

What is being gained by putting the girl in a shelter? I agree that pointing guns is bad practice, but this was an isolated incident in his own home. No one was hurt and there is no reason to think that anyone was in danger. It was a new gun, and the dad may not have even bought any ammo for it yet.

The The Seattle Times reports Bartashevitch's bail was set at $20,000. He is an employee of Minneapolis Public Schools. His bail conditions stipulate he should not contact his wife and daughter.

He faces a maximum prison sentence of five years for each count, and a $10,000 fine.

This is an attempt to bust up the family. He should certainly be allowed to talk to his wife and daughter. This is another example of authorities trying to destroy families.

The argument is, I guess, that the dad might talk to his family about the incident. Well of course he should talk to them about it. It would be wrong not to talk about it. There can be no justification for telling a man he cannot talk to his family. I would say this even if here were convicted of a crime, but here he is innocent until proven guilty and is only accused of a very trivial matter. 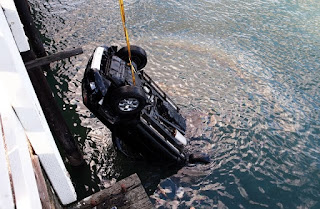 Here is another story of a dad getting into trouble with his kid:

A 16-year-old driver, his father and a dog were in a Toyota 4Runner that broke through the wooden railing and drove off the Santa Cruz Municipal Wharf on Monday morning, when the teen said the accelerator stuck, according to police Sgt. Jon Bush.

The car was parked on the wharf on the side facing the Santa Cruz Beach Boardwalk near lifeguard headquarters before it broke through the railing and went into the water.

This was funny. I hope that no one is being charged.
Posted by George at 8:00 AM

What sort of trouble did the father of the driver of the SUV get himself in ? Why do you think that the incident is funny ?

I don't know that the dad did get into any trouble, except for damage to his car, public embarrassment, etc. I have driven on that wharf many times, and I can imagine someone having this sort of accident. It would not be so funny if someone were hurt, but no one was hurt.

"It was a new gun, and the dad may not have even bought any ammo for it yet."

Yeah, like people who bought new cars and may not have even bought any gas for it yet.

Are the reports that he "waving a gun" or pointing it at his daughter ?

Why do you think that what he did was a "bad practice" if the gun was empty and no one got hurt ?

When you buy a car, it always comes with enough gasoline to drive home. When you buy a gun, it never comes loaded. So I do not get the point of your analogy.

I personally prefer to take multiple independent redundant safety precautions. So I might wear a belt and suspenders just to keep my pants from falling down. But I do not favor having cops arrest men whose pants have not fallen down.

Are the reports that he was "waving a gun" or pointing it at his daughter ?

Why do you think that what he did was a "bad practice" if the gun was empty and no one got hurt ?

Waving a gun at people is a crime. You're threatening them. Guns are not toys. You never point a gun at somebody you don't have a good reason to shoot, and you always treat every gun as if it were loaded, because it MAY in fact be loaded. People make mistakes. People make mistakes checking chambers, especially when they're emotional enough to do some dumb crazy shit like wave a gun at their family. A hell of a lot of people have carefully double-checked the chambers on their Glocks -- or at least they are 100% certain they did -- pulled the trigger to free the takedown lever, and put a hole in the wall. Or in their hand in some cases.

To guard against mistakes, we have four rules of gun safety. They are good, practical rules. They should be ingrained habits. You have to break at least two of them to hurt anybody with a gun. They were formulated by smart people with enormously more experience around firearms than you, and they have been debated for decades by other very smart people who have enormously more firearms experience than you.

By the way, a semi-auto "AK-47" is almost certainly an AKM variant of some kind, not an AK-47 as such. However, it is absolutely customary among knowledgeable and experienced gun people in the US to refer to it as an "AK-47".

If that guy pulled a stunt like that at a match I was RO'ing, he'd be getting the hell off my range instantly, and I'd go to the board and ask that he be banned from the club grounds permanently. I would probably get my wish. We have banned crazies before.

The County Attorney may or may not be a swine, but in the remarks quoted above, he has his facts straight about both gun handling and the law.

IT IS A CRIME TO POINT AN UNLOADED GUN AT SOMEBODY. That is the law. The law is written down. In words. English words. You know what those words say? They say that if you point a gun you know to be unloaded at somebody, that is a crime.

Oh, and by the way: I am 100% against any further gun control in this country of any description whatsoever. I agree with banning possession by violent felons or people adjudicated dangerously mentally ill by a court, with safeguards, review, etc.

Politically, I am a reactionary, deeply pro-male and deeply anti-feminist.

This guy is a goddamn criminal nutcase. This isn't some evil bitch making up "abuse" stories to divorce-rape an innocent man. This is a man who endangered his family by acting like a lunatic.

Not all men are always innocent. Some men really do bad things.

The story said he "supposedly pointed" a gun.

The arrest shows that it was a bad practice.

There is no law against pointing an unloaded gun in private. The cops were wrong to make the arrest. This is an example of evil busybodies trying to destroy a family.

RSO, there is no such law. If you think that there is, then please quote it. There are laws against threatening to shoot someone, but that is not what the man did.

I am against (1) criminalizing bad parenting practices that have no objective harm; (2) charging a crime when no such crime is in the law; (3) spying and intruding on private family matters; (4) putting the girl in a shelter; (5) ordering the man not to talk to his family; and (6) authorities trying to bust up families.

California Penal Code 417 PC prohibits “drawing, exhibiting, or using a firearm or deadly weapon”.1 This offense is commonly referred to as "brandishing" a weapon.

If you “brandish” a weapon or firearm in a rude, angry, or threatening manner, prosecutors could charge you with this offense.

This INCLUDES unloaded guns. But, you don't care about facts, just your opinions.

Under California’s gun laws, “‘firearm’ means any device, designed to be used as a weapon, from which is expelled through a barrel, a projectile by the force of any explosion or other form of combustion.”7 If the object meets this definition, it doesn’t matter whether it was loaded or unloaded at the time of the offense.8

Bartashevitch's wife explained to investigators that their daughter was telling the truth about the incident. She also said she tried to help her daughter but that her husband pushed her to the ground. Then he pointed the gun at the both of them.

“The man allegedly admitted to pointing the gun at this family, but added that he had checked the chamber beforehand to make sure it was not loaded.

"The story said he "supposedly pointed" a gun."

Who knows what a "story said" by the time you're through with it. Read these stories yourself, ok ?

The devil is in the details.

Yes, the first story said, "A Minnesota man supposedly pointed an AK-47 rifle". As you say, the article went on to say “The man allegedly admitted ...”. So what is your complaint? I gave you the facts.

These are allegations. They are not under oath, and probably not intended to be a criminal complaint. I will post more about this tomorrow.