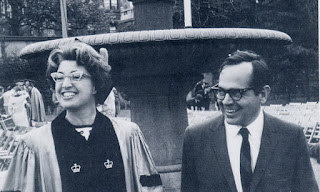 Gerda Lerner, a scholar and author who helped make the study of women and their lives a legitimate subject for historians and spearheaded the creation of the first graduate program in women’s history in the United States, died on Wednesday in Madison, Wis. She was 92.

Really? I had never heard of her, but if she was really so influential in teaching American women’s history, then it is worth looking into what sort of person is corrupting the educations of our girls.

She was an unrepentant Jewish Communist.

A more thorough investigation by the Gestapo might have revealed that their young prisoner had been doing underground work for the Communists for several years.

Through a marriage of convenience, Gerda Kronstein made her way to New York, ...

In 1941, she married Carl Lerner, a theater director and Communist who helped her polish her halting English by having her repeat tongue-twisters like “Mae West is wearing a vest.” The couple moved to Hollywood, where Mr. Lerner became an apprentice film editor.

Dr. Lerner placed a short story based on her jail experience, “Prisoners,” in The Clipper, a liberal literary journal, joined the Communist Party and began working with community groups to organize supermarket boycotts and neighborhood child care centers.

The AP and Reuters obituaries do not mention the Lerners' Communist activities. They do say that she was a co-founder of the National Organization of Women and supporter of other feminist causes.

I am not going to recite the evils of Communism here. Talk to someone who lived under Communism or read about the millions they killed. Yes, they were worse than the Nazis, who were also evil. I hate to speak ill of the dead, but she was part of the greatest evil movement of the 20-th century.

Update: A reader wonders what this has to do with the family court. The answer is that judges do not think up of anti-parent views by themselves, and I sometimes post about where those biases come from. We have colleges that brainwash students with feminist anti-father beliefs, and this Communist professor was a leader in such brainwashing.

Many of the leaders of the movement to separate dads from their kids are Jews, Gays, and women. I do criticize them for what they say and do. When I find examples who are not anti-family, then I happily praise them.
Posted by George at 8:00 AM

Your blog has little to do with the Family Law Court, and seems to be all about bashing Jews, Gays, and women.

Well gee, who do you think was a driving force behind the creation of monstrously unjust family law courts?

Read Dr.Stephen Baskerville and other authorities on the subject, who outline who's responsible for the laws. You'll find that they don't ever attribute them to Jews, Gays or women. Gee...

He does not blame the Commies either. The lawmakers are ultimately responsible for the laws they pass. I am posting some of their influences. This professor did not pass any laws -- she just brainwashed students.

Right, the lawmakers are responsible for the laws they pass, and they're influenced by many different people and interests. You could argue that most professors brainwash students.

If you read about Lerner, you'd know that she was not anit father. She had serious issues with her mother.

So many of these "rights" groups all lead back to Communist money that was gobbled up by spoiled lazy Marxist who were more than happy to help destroy the greatest nation in Earths existence. Kruschev told America that he was sending thousands of agents and graduating hundreds of Communists everyday in America and that one day we would wake up and realize we were actually living in a Communist nation and would have no idea how it happened. He was right.