The same-sex marriage battle is heating up in France and Britain, and the leftist LGBTQIA lobby is portraying it as civil rights versus religious intolerance. If that were true, it would be off-topic for this blog. But it is not true. The issue is more a matter of parental rights and destruction of the family.

PARIS— French President François Hollande campaigned on a pledge to legalize gay marriage, though it drew little attention at the time, and he now has the votes in Parliament to do it.

A bill is slated for debate later this month, and there is every expectation that it will pass – in what form, exactly, remains to be seen – but the issue has now prompted fierce reactions here.

Religious leaders have denounced the bill, but so have secular groups and politicians of all leanings and groups concerned that gay marriage will threaten national unity by encouraging special interest groups to request exceptional rights.

Much of the opposition has focused on questions of parenthood. As currently written, the bill would allow married gay couples to adopt children together, and opponents have said they fear for children not raised by a mother and father.

But there are of course plenty of single-parent homes in France, and the majority of children born here are now born out of wedlock. Many French view marriage as having religious overtones, though weddings here are thoroughly secular affairs, in general, conducted in town halls by local officials. Marriage numbers have been declining in France for years.

Mr. Hollande himself is not married and has no apparent intention to wed – opponents of the bill are fond of noting this – and his partner, Valérie Trierweiler, remains the legal wife of another man.

Civil unions have grown increasingly popular. A system of civil unions known as the PACS, or Pacte Civil de Solidarité, was established in 1999. Though the PACS was originally intended as an alternative to marriage for homosexuals, the vast majority of the unions are now between a man and woman.

The PACS does not confer the same rights as marriage, especially with regard to parental rights but also in terms of inheritance and fiscal benefits. Gay rights groups have continued to push for full marriage rights, though some have said they would be satisfied with an enhanced PACS.

So they have civil unions, but that is somehow not good enough. While the elites favor same-sex marriage, the French public is against it:

Anti-gay marriage groups staged demonstrations across France in October and November that attracted an estimated 100,000 people. The ruling Socialist Party has decided to fight back by throwing its support behind a counter-demonstration due to take place in Paris this weekend.

A spokesman dismisses the protests:

There were people, of course, but it wasn't a tidal wave. It was essentially white Catholic France in the street. That will not interrupt the passing of the bill.

Hollande is a Socialist who is out to destroy the family as some sort of remnant of an outdated "white Catholic France".

But the protesters are not complaining that homosexuality is a sin, as they are not objecting to the civil unions. Just look at their signs. 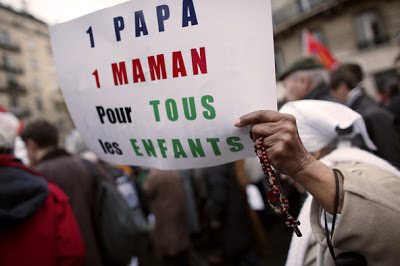 Maybe the White French people will change their minds about Gays like the Boy Scouts of America.