DSM-5 has conflicts of interest 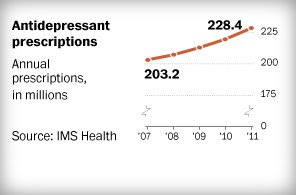 It used to be that depression was a mental disorder. If you were feeling depressed after the death in your family, that is not the disorder of clinical depression, because that is a completely normal response to circumstances.

No more. Big pharmaceutical companies have drugs for depression, and psychiatrists are only too happy to prescribe them. So they give pills to people who are mourning a death in a completely normal way.

In what some prominent critics have called a bonanza for the drug companies, the American Psychiatric Association this month voted to drop the old warning against diagnosing depression in the bereaved, opening the way for more of them to be diagnosed with major depression — and thus, treated with antidepressants.

The change in the handbook, which could have significant financial implications for the $10 billion U.S. antidepressant market, was developed in large part by people affiliated with the pharmaceutical industry, an examination of financial disclosures shows. ...

The financial ties between the creators of the APA handbook and the industry far exceed limits recommended in 2009 by the Institute of Medicine, a branch of the National Academy of Sciences. ...

The paper gives the impression that everyone would be happy if only the committee appointed psychiatrists with integrity and without conflicts of interest.

Not me. There are no psychiatrists of integrity. It is better to just admit upfront that the DSM-5 is primarily a guide for extracting money from patients, insurance companies, and govt agencies. It does not really diagnose disorders. It cannot define what a disorder is.
Posted by George at 8:00 AM

There are no psychiatrists of integrity ? Do you know all the psychiatrists in the world ? You were able to determine this without a doubt ? Simple minded thinking again, don't you think ?

I did credit a psychiatrist last month. But the whole field is corrupt.