French magazine made other enemies 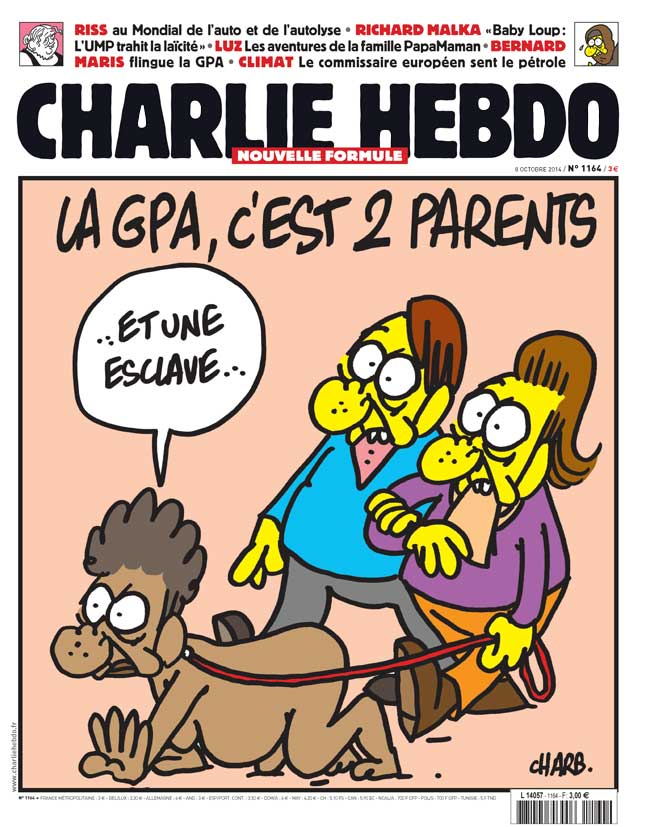 The French magazine Charlie Hebdo lampooned many targets, including what the French call "GPA", an acronym for "gestation for others". The magazine is left-wing, of course, as that is why Pres. Obama and many others have spoken up. France and other European countries have laws against freely speaking about other groups, and when right-wing groups complain about all the Mohammedan immigrants, they get prosecuted for hate speech.

France is very tolerant of all sorts of sexual practices, and even the President can have a mistress. But even this magazine says a kid should have a mom and a dad:


In his 1164 number of 8 October 2014, the weekly Charlie Hebdo shows a drawing of a Charb, the director of the publication, with this comment: "The GPA is two parents and a slave." Is this the beginning of an editorial change, the better an ideological revolution? ... "Behind the GPA is emerging eugenics."

The cartoon is a little racist, as the surrogate/slave is shown as black. I think that it is likely that there are more caucasian women carrying babies for non-caucasian couples, than non-caucasians carrying for caucasians.

This week's issue of Charlie Hebdo is going to feature Mohammed cartoons. This week's The Economist magazine has a story about the Mideast, and the map omits Israel.

There is a long history of Islam accepting images of Mohammad, so the cartoons are not really contrary to the religion. But there are Islamic clerics today who say that building a snowman is offensive to Islam.

I am all in favor of free speech, and it is very impressive that Paris got a million people marching for the cause, but how is it free speech when France's right-wing party was barred from national unity rally? A Dutch politician was put on trial for criticizing Islam.

Update: Here is the new issue. Not sure what it means. I guess that is supposed to be Mohammad with a tear. It is not clear who is being forgiven, Mohammedans or cartoonists. The phrase "Je suis Charlie" means either "I am Charlie" or "I follow Charlie". My guess is that they wanted to defiantly show Mohammad, while not saying anything offensive. The magazine was on the verge of bankruptcy, like most magazines today, and now it has a new life.
Posted by George at 8:00 AM

Look carefully at the hat, and the head. Visualize it upside down; save it and rotate it if you need to.

It's a cock and balls.

They're being as cheeky / offensive as ever.