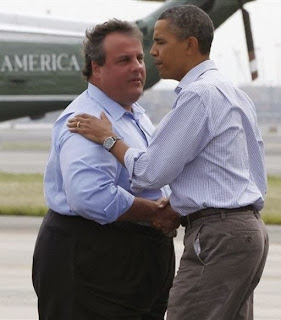 New Jersey is the latest state to adopt same-sex marriage, by a contrived scheme without a legislative or court decision, like California:


So it would seem that same-sex marriages, which began early Monday in the state thanks to a court ruling issued Friday, will continue.

Colin Reed, a spokesman for the Republican governor, tells the Star-Ledger that "although the governor strongly disagrees with the court substituting its judgment for the constitutional process of the elected branches or a vote of the people, the court has now spoken clearly as to their view of the New Jersey Constitution and, therefore, same-sex marriage is the law. The governor will do his constitutional duty and ensure his administration enforces the law as dictated by the New Jersey Supreme Court."

Gov. Chis Christie is running for reelection in a blue state. He and Pres. Obama used to claim that they were in favor of letting the people decide for themselves in each state. That is not happening in the blue states.

The funny thing is that the LGBTQIA lobby seems to want it this way. They say that some rights are so important that they should not be subject to a popular vote. So the fix is in, and we are going to get same-sex marriage whether it is popular or not, and whether the political or judicial process for it is legitimate or not.

I am much more concerned about family court policies toward natural parents. You could say that I should just accept that my views towards parental rights and the value of dads are in the minority. Yes, a lot of my views are in the minority. Part of why I post on thie blog is to try to convince the majority that they are wrong.

But even if I had the majority on my side, I am not sure it matters. The fix is in for certain leftist, feminist, anti-family goals, and we get certain policies without much public discussion or agreement.
Posted by George at 8:00 AM

I think TV is far more responsible for acceptance of gay marriage than the courts. Gay characters on TV have made people feel like they have lived with gay people.

that said, im from MA and lots of my relatives and the population in general was in a panic when gay marriage passed. almost 10 years ago btw.

That was 10 years ago last May. Now there isnt anger over the issue. So many gay people have come out and so many people interact with gay couples that there is still judgement by some but the anger and fear is gone.