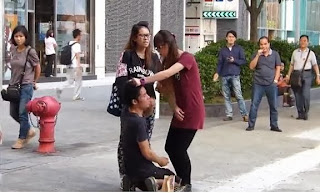 My prejudices are such that I do not expect male-female relations to be as screwed up in the rest of the world as in the USA, but consider this story from Hong Kong:


They say hell hath no fury like a woman scorned – and a video of a girl repeatedly slapping her boyfriend in the street appears to prove that.

The five-minute video, which has gone viral with more than 27,000 views since it was posted on October 6, shows a young man on his knees in a Hong Kong shopping street with his girlfriend standing over him, scolding him in Cantonese for inviting another girl to his apartment.

A second female stands beside the two. It is unclear whether she is the girl at the heart of the altercation, although the young man asks her several times to confirm what he is saying.

“Why did you tell her to go to your apartment?” demands the girlfriend.

“Listen to me first before beating me!” he pleads, before adding: “I told her not to come!”

Four minutes into the video a substantial crowd has gathered to watch the spectacle in a Kowloon City street.

A female passerby eventually called the police and the girl was arrested.

The You Tube video is here, along with some stinging commentary on the pathetic man.
Posted by George at 8:00 AM