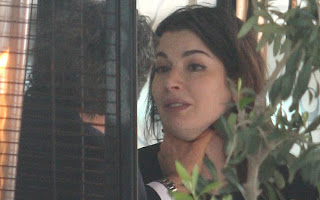 What is a man to do with if his wife fails to show loyalty? Here is one rich man's response, in a minor British scandal:

The multi-millionaire art collector, 70, said he made the “heartbreaking” decision to formally split from his wife of 10 years because she refused to defend his reputation after he was seen grabbing her outside Scott’s restaurant in London.

He told the Mail on Sunday: "I am sorry to announce that Nigella Lawson and I are getting divorced.

"I feel that I have clearly been a disappointment to Nigella during the last year or so, and I am disappointed that she was advised to make no public comment to explain that I abhor violence of any kind against women, and have never abused her physically in any way."

Mr Saatchi is said by the paper not to have spoken to his wife since the pictures were published.

The advertising tycoon said: "This is heartbreaking for both of us as our love was very deep, but in the last year we have become estranged and drifted apart... The row photographed at Scott’s restaurant could equally have been Nigella grasping my neck to hold my attention – as indeed she has done in the past."

This picture looks bad, and you can judge the others for yourself. I certainly do not believe that he was trying to strangle his wife in a public restaurant. She could have screamed or made a complaint, and she has not.

I am in no position to judge their marriage, of course, but it is a bad sign that she was unwilling to publicly defend her husband. For her to refuse is almost the same as saying she wants a divorce.

Here is another rich man problem:

An heir to the Levi Strauss fortune promised his girlfriend he would give her $300,000 if she aborted his child - but then didn't pay her the money when she went through with it, she has claimed.

Daniel S. Haas, a descendant of the Haas brothers, allegedly pressured Christina Helm, 45, into getting a termination because he was worried having a child out of wedlock would shame his family.

He also feared what impact the baby would have on his life - and didn't want to stop taking extended ski-trips to Lake Tahoe or long surfing trips to South America, according to a complaint filed in Los Angeles Superior Court.

At one point, he became so panicked about Helm keeping the baby that he smacked her across her bare stomach with her hand and demanded that she carry out the abortion, the complaint says. ...

When she told him, he allegedly demanded she have an abortion, but she said she needed to take time to think about it as she was 45 and feared it could be her last chance to get pregnant.

But the complaint claims that Haas was under the control of his family who pressured him to end the relationship and the pregnancy because upholding the family's image was of 'paramount importance'.

'Due to the family's wealth, the man never had to work,' the complaint says. 'Throughout time, the man became complacent and never stood up to the family.

Here's one for ya:
http://www.mlive.com/news/muskegon/index.ssf/2013/07/caught_on_video_muskegons_wido.html