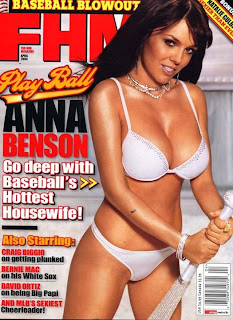 
Crazed “Baseball Wife” Anna Benson dressed like a ninja and armed herself with a gun, ammo and bullet-proof vvest to break into the home of estranged hubby and ex-Mets pitcher Kris Benson, demanding dough and calling him a “p---y,’’ a police report shows.

The former Playboy Playmate and mom of four, 37, ambushed her stunned husband, 38, Sunday night as he exited the bathroom in the master bedroom of the home they once shared in Marietta, Ga., the document says.

She also had on her a black Taurus handgun and red “Batman” folding knife, authorities said. ...

She told the officers “she didn't think that she did anything wrong and didn’t understand why we were making such a big deal out of this,’’ according to the report.

Anna, who starred on VH1’s “Baseball Wives” in 2011 and 2012, was infamous for her sideshow antics while her husband was a starting pitcher at Shea Stadium about a decade ago.

She made her most infamous headlines in 2004, when she made her threat to bed all the Mets in an interview with shock jock Howard Stern.

It is amazing what a woman can get away with if she has a body like that. I thought that they get a little less crazy after age 37 and 4 kids. Maybe not.

If she were a man, she would be considered a sexual predator and put in jail. As it is, she is a source of amusement. I am afraid that if I met her, she would take sexual advantage of me and drain me of all of my sexual energies before discarding me. I would be helpless to resist her charms. Lock her up before she causes more trouble!

The same paper has lots of other wacky stories, such as this celebrity gossip:

Tiger Woods’ former mistress is back on the market – Rachel Uchitel and Matt Hahn are divorcing after a year and a half of marriage.

According to TMZ, Hahn filed for divorce from the “Celebrity Rehab” cast member, citing "cruel and inhumane treatment" as his grounds for the split.

The two had “many explosive, verbal arguments,” the gossip site reports. Sources said that the 38-year-old nightclub promoter would allegedly slap her husband after he allegedly called her names.