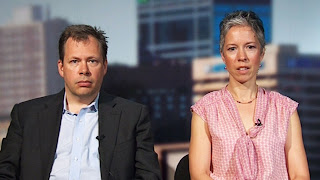 Chateau Heartiste likes to make fun of men who put up with emasculating wives and girlfriends, and posts:


Is it really good for the children to see their father so pathetically emasculated on a daily basis? That’s the question that swirls around July’s Beta of the Month candidate, a broken man who continues living under the same roof (for which he likely foots the full bill) with his happy ex-wife in a refitted “divorce house” that’s partitioned down the middle. ...

Everyone in this family is smiling except for the house eunuch: ...

The only sure cure for an ex-wife is moving out of the country and covering all your tracks. Or, you can be all the beta you wanna be and share an exquisitely demarcated home with an ex-wife who loves taking photos of your hang-dog face to show the world how much she has your balls in a vise.

In related news, the West is still collapsing. Event horizon endgame should be any day now.

He is right. No man should put up with this sort of nonsense. Too often men are praised for sacrificing their manhood for the sake of a contemptible woman. CH admires men being men and women being women.

I question whether supervised visitation is good for the children.

Bad as this man is, a reader sent me a worse example:


Julia Charlene Merfeld said she wanted her husband killed because “it was easier than divorcing him.”

That explanation came in a meeting with a man Merfeld thought she was hiring to do the murder.

Merfeld, 21, of Muskegon didn’t know the man was really an undercover police detective, or that she was being recorded on a hidden videocamera.

“When I first decided to do this … it’s not that we weren’t getting along,” she says on the video. “But … terrible as it sounds, it was easier than divorcing him.

Another motive, authorities have said, was the 27-year-old husband’s $400,000 life insurance policy. Julia Merfeld told the fake hit man he’d be paid $50,000 from the proceeds, in a series of weekly $9,000 installments to avoid suspicion from her bank.

Her husband and intended victim asked that she get no jail time at all, the sentencing judge said in court at the time of her guilty plea. Instead, Chief Muskegon County Circuit Judge William C. Marietti committed to cap her minimum sentence at six years. The maximum can be anything up to life in prison, depending on Marietti’s decision at her sentencing July 30.

You can also watch the video on the NY Daily News or on Yahoo News.

I used to think that men were always admirable when they took extreme measures to support their families. I was wrong. These men are enablers of bad behavior, and are despicable.


Dear Annie: I am 15 and the oldest of four boys. During one of many fights between my parents, my mom left the house with my brothers and me, and we spent the night at a shelter.

Our grandparents told our father that we have no values because we went with our mom. They say we are old enough to know better. This makes us feel guilty about the fights. Now my grandparents refuse to see us even for our birthdays, because they say we are not loyal to the family and don't deserve them.

Annie, we are losing our family and our grandparents all at once. Our school guidance counselor tells us it's not our fault, but we feel like outcasts.

The kids were disloyal to go to the shelter. There was no reason for them to do. They should listen to their dad and not the stupid guidance counselor.
Posted by George at 8:00 AM

The kids were disloyal to go to the shelter. There was no reason for them to do. They should listen to their dad and not the stupid guidance counselor.

Are you ever capable of viewing anything other than through your own prism, George?

* We do not know what prompted the kids to also leave the house that night, yet you assume they had "no [good] reason."

* We do not know what the father thinks of the fact that his children spent a single night at the shelter. The 15-year-old's letter states that it is the grandparents who have banished these kids for what the grandparents perceive as a disloyal transgression.

* That the grandparents are shunning their son's children is cruel -- and far more stupid than what the guidance counselor said, if for no other reason than it bespeaks of a foolish eagerness to "cut off your nose to spite your face."

I am relying on what the kid said, and assuming that the kids went to the shelter because the parents had a fight and the mom took the kids.

You're right, I don't know the dad's opinion, but the kids are disloyal anyway.

I follow your blog and generally agree with most everything you say. But this is an invidious situation for the children. Mothers will often drag their kids away and there is very little the father can do about it and kids are brainwashed into believing they have to follow the dictates of the mother. Mine even notified the school I was not to take my daughter from her school - which she was not allowed to do and it had no legal force but the school went along with the mothers wishes. Protesting, I was threatened with the police, even though I was doing nothing wrong, it would be off to the cells. The child - even though it may be against their wishes - will follow the mother. She has all the back up. So on this, I would disagree, it takes a measure of stability and determination for a child to decide where they want to be, and that isn't often present in the early teens. With mine, once the dust had settled and visitation granted, she made her choice and couldn't get away from her mother fast enough but I couldn't view her as being disloyal when she was first dragged off.

You are right that the kids probably didn't know any better. I am just saying that they were disloyal, but not expressing an opinion on whether they should be punished for it. The grandparents apparently wanted to make a point. It is a legitimate point, and I am not sure the kids get it. Whether the grandparents are making the point in the best way, I have no opinion.

Women are 250x (that is two thousand five hundred percent) more likely to use children as pawns in their Cluster-B dysfunctional destruction of families.

The children are always better off with the man. Domestic Violence towards children figures show mothers the most violent (47% of abuse) VS the safest demographic of all (7% of abuse) for dear old Dad.

Ladies, either take some pills or just go away yourselves. No one loves you, not even the cat.