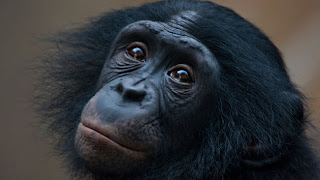 
In The Bonobo and the Atheist: In Search of Humanism Among the Primates, primatologist Frans de Waal explores traits like empathy and fairness in our closest relatives, bonobos and chimpanzees, and argues that human morality is not the product of rational thought or religion, but evolved long ago.

A reader sent this review:


One of the world's leading primatologists believes his decades of research with apes answers a question that has plagued humans since the beginning of time.

Frans de Waal argues in his latest book that the answer is clearly the latter. The seeds for moral behavior preceded the emergence of our species by millions of years, and the need to codify that behavior so that all would have a clear blueprint for morality led to the creation of religion, he argues.

I am very skeptical about drawing moral lessons from apes. First, we are equally closely related to chimps and bonobos, but they are completely different in their social structures, customs, sex practices, etc.

Second, it is very difficult to detect something like empathy or morals in a wild animal.

Third, animals do all sorts of things that we do not tolerate in humans. Besides stealing, killing, etc, the male apes are all deadbeat dads. They do not support their young. They are much more concerned with fighting off rival males.


Regardless of the ancestral state of early humans, arranged marriages probably have an evolutionary history going back at least 50,000 years.

So maybe we had 5M years of living like apes, then 50k years of arranged marriages, then 500 years of modern civilization with nuclear families, and now we are embarking on a grand social experiment where the family is being destroyed and managed by the state. Human nature is not changing, but our social structures are radically changing. I am not optimistic.
Posted by George at 8:00 AM

I agree. When someone's research indicates something you don't like, the thing to do is to dismiss it out og hand.