I posted on the criminalization of parenthood, and the stories keep coming.


Is it child abuse if someone leaves a toddler in a car to run into a store? That’s a question the New Jersey Supreme Court is going to take on.

The case revolves around reckless endangerment charges against a New Jersey mother who left her 19-month-old in her car for five to ten minutes to run into a store for party supplies.

She was arrested when she got back to her car and earlier this year, an appellate court ruled her actions amounted to abuse. ...

New Jersey’s DCF [aka CPS] says under no circumstances should a child be left in a car for even a minute — warning of abduction, dehydration, injury or even death.

No, this is crazy paranoia and CPS expanding the nanny state. Child abuse is usually defined in terms of willful harm to the child, and no kid has ever been harmed by being left in a car for a minute.

Here is an update on a Florida case:


A Jupiter woman will not serve jail time after, Jupiter police say, she left her child inside a hot car while she went shopping. Cases like this have shined a spotlight on the nationwide problem. That's why child safety advocates plan to hold an event Tuesday morning to raise awareness.

"I'm in the TJ Maxx parking lot, and there is a baby in a locked car with the windows closed," says a woman who called 911.

It's the first time we've heard the emergency call made on April 25.

"No parents, the cars not on, the windows are barely cracked, and it's almost 100 degrees outside," says the caller.

Jupiter police say the toddler was left alone inside the parked SUV. Fire Rescue then gave instructions to the woman who called 911. "They're saying to break the window," says the caller, "The baby's in the backseat."

A police officer broke a window to rescue the child. The mother, Arlinda Wiebe, was charged with child abuse. According to the police report, Wiebe told the officer she left the child in the car because, "He was sleeping, and it was just a few minutes".

A lot of people seem to think that it is better to leave the keys in the ignition with the air conditioning on, when a kid is left in the car. In fact this is expressly forbidden under California law:


Prohibition Against Unattended Child in Vehicle

15620. (a) A parent, legal guardian, or other person responsible for a child who is 6 years of age or younger may not leave that child inside a motor vehicle without being subject to the supervision of a person who is 12 years of age or older, under either of the following circumstances:

(1) Where there are conditions that present a significant risk to the child's health or safety.

So you can leave a kid in the car as long as it is safe AND the keys are not in the car.

This case got a lot of TV publicity:


After her child care plans fell through at the last minute, an unemployed single mother in Arizona felt she had no choice but to take her young children with her and leave them in the car while she interviewed for a job nearby, she said Thursday.

“It was a moment of desperation," Shanesha Taylor said in an exclusive interview on TODAY. "It was me knowing my family was in crisis and knowing that I had to make a choice between providing for my children or caring for my children.”

Authorities arrested Taylor in March for leaving her 6-month-old and 2-year-old sons alone in her sports utility vehicle while interviewing for a job nearby in Scottsdale, Arizona. Last week, prosecutors agreed to drop felony child abuse charges against Taylor as part of a settlement that requires her to successfully complete parenting and substance abuse programs.

Taylor told TODAY's Matt Lauer a sitter scheduled to look after her two youngest children “flaked on me, is the best way to say it." That’s when she felt she had to take her children with her to the interview. ... 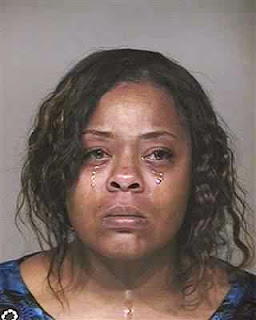 Unlike another “hot car” parent currently under investigation, Taylor’s case attracted widespread support after her tearful mug shot photo drew sympathy and sparked a national discussion about the poor and unemployed. After media reports about Taylor’s story, support poured in from strangers across the country, including a New Jersey woman who launched an online fundraising campaign. As part of the settlement, Taylor must put the nearly $115,000 that was raised toward an education trust fund for her children.

Taylor said she is happy with the deal. ...

Taylor last saw her children, who were released into the custody of family members, on Monday. She faces additional court hearings to regain custody.

“I get to see them every weekend. We definitely have a lot of family time. You know, do as many activities as we can in the short two days,” she said.

Obvious CPS is holding her kids hostage, and forcing her to play their game to get them back.

Update: The NY Times update became its most emailed story:

Arizona: Mom of Boys Left in Car May Be Spared Charge

A prosecutor has agreed to drop felony child abuse charges against Shanesha Taylor, 35, a homeless mother who left her two sons in a hot car while she went to a job interview, if she completes parenting and substance abuse treatment programs and sets up trust funds for her children. The money is to come from the $115,000 donated to Ms. Taylor after her case drew national attention. Bill Montgomery, the Maricopa County attorney, said the deal would hold Ms. Taylor accountable “while also recognizing the best interests of her family.” She is seeking to regain custody of her children, who were placed in foster care after her arrest.

Wow, this is the first case I've heard where a parent was forced to give up control over donated money.
Posted by George at 8:00 AM