For and Against Wife Beating 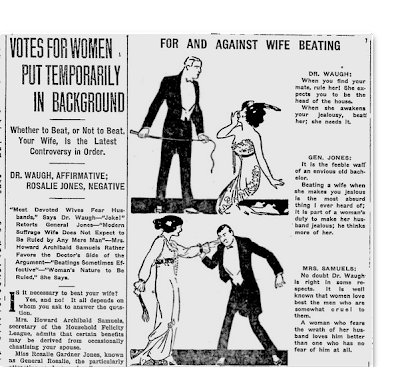 
Early last century, wife beating was routine. A North Carolina newspaper from 1913 carried a front-page story titled, "For and Against Wife Beating." Most "expert" commentary was in favor of it. One doctor argued, "Beat her, she needs it," and a female advice columnist declared, "It's well known that women love most the men who are cruel."

I don't have the whole original article, and it could be a joke, but here are more details:


The debate begins with Waugh's claim that women must be ruled with violence. "When you find your mate, rule her!", he says, "She expects you to be head of the house. When she awakens your jealousy, beat her; she needs it." Horrific.

Rosalie Jones defends her side by stating that wife-beating is "the feeble wall of an envious old bachelor." "Beating a wife when she makes you jealous is the most absurd thing I ever heard of;" she argues, "it is part of a wife's duty to make her husband jealous; he thinks more of her." Not an ideal line of argument, but at least someone is representing the 'against' side in this insane article.

The secretary of the Household Felicity League, Mrs Howard Archibald Samuels, concludes the argument, siding firmly with Waugh. "No doubt Dr Waugh is right in some respects", she responds, "It is well known that women love best the men who are somewhat cruel to them. A woman who fears the wrath of her husband loves him better than one who has no fear of him at all."

If there were some kind of gay sadomasochism thing, the news media would praise it.