Mom charged for attention to boyfriend 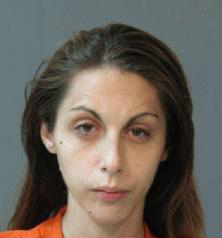 A Louisiana woman left her two young children unattended in her SUV while she performed oral sex on her boyfriend in his vehicle around 12:30 AM Friday, police report.

Princess Marks, 25, reportedly admitted to Calcasieu Parish Sheriff’s Office deputies that she was unable to see her children -- aged seven and five -- while she was pleasuring her boyfriend in the parking lot of a Lake Charles store.

Cops found the children inside the SUV, which was not running and had its windows down.

Marks’s post-midnight assignation resulted in her arrest for child desertion. Seen in the adjacent mug shot, Marks was booked into jail and later released after posting $5000 bond on the felony count.

Following her collar, Marks’s offspring were placed in the custody of family members. Her beau -- whom investigators did not identify -- was not arrested.

This was after midnight, so the kids were very likely to be sleeping. If she had them asleep in bed at home and she was pleasuring the boyfriend in the next bedroom, she would also be unable to see them.

This is not "child desertion". The mom was letting the kids sleep, not abandoning them. The poor single mom needs to get some sexual action somehow.
Posted by George at 9:00 AM

You've had a number of these posts recently, about the superhuman standards of vigilance parents are required by law to maintain. Duties that are impossible to discharge - *unless you can pay for a staff of full-time nannies*.

That is, these court decisions are about *class*. Social class. The well-off despise the poor for breeding.

Class is part of it. It is also an attack on family autonomy.

class, family autonomy, sure, but lets not forget about good old fashion self-interest by lawyers, expanding the power and scope of the legal system.