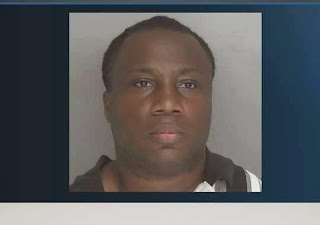 Police arrested a Douglasville father on child cruelty charges after the man punished his 16-year-old son by making him carry a 23-pound landscape stone for several miles.

Charlie Mayes, a 40-year-old military veteran with no criminal record, told police he used military-style punishment because his son watched too many videos and didn't do his chores and school work. Douglasville Police charged Mayes with first-degree child cruelty.

"This was done multiple times over a three-day period, sometimes as early as 3 o'clock in the morning," Police Sgt. Todd Garner told 11Alive on Tuesday.

Garner said the boy, who is only 4'2" tall, was also punished in-between the 3-mile hikes.

"In between that time, he was at home having to move rocks and stuff from one side of the back yard to the other and then being taken right back out to the same location and dropped off and made to walk back again," Sgt. Garner added. ...

Douglasville police have yet to make the video available, but say the father freely admitted what happened.

"He did not feel that this was inappropriate at all and neither did his wife," Sgt. Garner said.

This sounds peculiar, but I don't see how it is a crime. Parents need to have some discretion in disciplining their kids. We don't have the context, and the cops don't either.

A criminal prosecution should be based on some intentional objective harm. There is no obvious harm in carrying a stone. The parents appear to have a sincere belief that this is appropriate.

Some people will read this, and say that they would never punish a boy like that, or that other methods should be tried first. Maybe so, but no matter how you discipline a child, there will be others who believe that you did it incorrectly. Do you really want CPS, cops, and prosecutors second-guessing routine parenting decisions?

Here is a more serious case of excessive discipline:

A Pakistani immigrant beat his wife to death in their Brooklyn home after she made the mistake of cooking him lentils for dinner instead of the hearty meal of goat meat that he craved, according to court papers.

Noor Hussain, 75, was so outraged over the vegetarian fare that he pummeled his wife, Nazar Hussain, 66, with a stick until she was a “bloody mess,” according to prosecutors and court papers.

“Defendant asked [his wife] to cook goat and [his wife] said she made something else,” the court papers indicated as Hussain’s murder trial opened on Wednesday.

“The conversation got louder and [his wife] disrespected defendant by cursing at defendant and saying motherf- -ker, and ... defendant took a wooden stick and hit her with it on her arm and mouth.”

Defense attorney Julie Clark admitted Hussain beat his wife — but argued that he is guilty of only manslaughter because he didn’t intend to kill her. In Pakistan, Clark said, beating one’s wife is customary.

“He comes from a culture where he thinks this is appropriate conduct, where he can hit his wife … He culturally believed he had the right to hit his wife and discipline his wife.” - Defense attorney Julie Clark

“He comes from a culture where he thinks this is appropriate conduct, where he can hit his wife,” Clark said in her opening statements at the Brooklyn Supreme Court bench trial. “He culturally believed he had the right to hit his wife and discipline his wife.”

I wonder if it is really true that this would not be a crime in Pakistan.
Posted by George at 8:00 AM

George, you were talking about leaving the U.S.. Pakistan sounds like the right place for you.