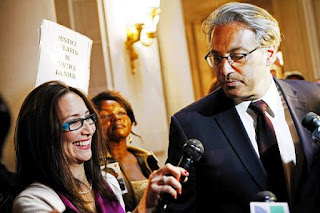 Suspended San Francisco Sheriff Ross Mirkarimi will return one last time in front of the city's Ethics Commission early Thursday when the commission will make a recommendation on whether he should be removed from office.

Mirkarimi was suspended without pay by Mayor Ed Lee in March after he pleaded guilty to misdemeanor false imprisonment in connection with a Dec. 31 incident in which he grabbed and bruised his wife's arm during an argument.

Mirkarimi is a leftist kook who seems to be only getting support from the Greens. Andrew commented:

Another thing, why do you keep defending Mirkarimi's actions, even though he pled guilty to the crime anyway? Even if the victim doesn't complain, the domestic violence is still inherently illegal, so should the law be relaxed or what? Just because the victim doesn't complain doesn't make a crime non-prosecutable. That is why California kept pursuing Roman Polanski for the past 3 decades even though his rape victim (age 13 at the time) later personally decided against having Polanski extradited to the US. And I've read stories in the news about people getting prosecuted for robbing dead people's homes (like this case where the robbers got 8 years each for robbing the home whose residents all died in a car crash) or more recently an arrest for robbing Steve Jobs's house.

Roman Polanski was pursued for statutory rape. That means that it was a crime regardless of the 13yo girl's opinion of the matter. We do not expect 13yo girls to make adult decisions. Murkarimi's wife is an adult, and she is certainly capable of consenting to her arm being gripped.

Yes, it is a crime to steal from Steve Jobs' house because his property is owned by his estate, and hence his heirs. If they were to announce that they do not object to thieves stealing from the house, then such thieves would not be prosecuted.

I do say that Mirkarimi should not have been prosecuted because no complaint was made by an interested party. He and his wife are adults. Whatever happened between them is their business, not the mayor's and not the public's.

The liberal Democrats who control San Francisco are completely opposed to civil liberties. It is their policy to intervene is people's lives and try to ruin them, if they have some personal disapproval of their behavior.

Here is an example of the bigoted hatred that those people generate:

(AP) WASHINGTON - A man suspected of shooting and wounding a security guard in the lobby of a Christian lobbying group had been volunteering at a community center for gay, lesbian, bisexual and transgender people.

The LGBT groups have disavowed such violence, but they are incredibly hostile, provocative, spiteful, hateful, and oppressive towards Christians. They do not respect free speech.

I don't know how anyone can compare Mirkarimi to Polanski. That 13yo girl was raped. The Mirkarimi-Lopez incident was completely trivial, with no one being hurt and no one complaining.

Update: An SF Chronicle editorial piles on, and urges ousting him:

Nothing has changed the heart of the charges against Mirkarimi. His rough and bruising treatment of his wife, Eliana Lopez, and his subsequent actions to tamp down the incident make him unfit to be sheriff. ...

Mirkarimi, of course, could have spared the city a legal spectacle by quitting. He originally took a plea deal, accepting a misdemeanor charge of false imprisonment that originated from an argument with his wife while their child watched.

Then Mirkarimi went into political overdrive, declining to cooperate with police and hiding behind lawyers. His subsequent protestations of regret aren't enough. ...

The next stop before the supervisors will be the final act. It will take nine of 11 votes to dismiss Mirkarimi, a former supervisor and member of the board's progressive flank. ... It's time to remove a discredited figure. Mirkarimi should be dismissed.

What? He pled guilty to the charge and then declined to cooperate with police? What did the police want? After the plea bargain, the criminal case was over and there was no reason to talk to the police. You can get a video of his story here. I don't know what more anyone wants to know.

San Francisco politics is dominated by leftists, progressives, gays, lesbians, Jews, Greens, and other fringe groups. It is the most intolerant place on Earth. I have never heard of any other city doing anything like this.

In my opinion, Ivory Madison should be disbarred for betraying an attorney-client privilege. Lopez went to her for a confidential legal opinion, and Madison used that info to make a police complaint detrimental to the wishes of Lopez.

Update: The LA Times reports on the day-long hearing:

After 10 hours of emotional public testimony and difficult deliberation, the city Ethics Commission on Thursday found that Sheriff Ross Mirkarimi had engaged in official misconduct by inflicting "physical violence" on his wife during an argument and pleading guilty to falsely imprisoning her.

But at the end of the day, his fate was no clearer.

The commission did not explicitly vote on whether Mirkarimi — who has been suspended by Mayor Ed Lee — should be permanently removed from his job. ...

Mirkarimi is more than a third of the way through 52 weeks of domestic violence training mandated by his plea agreement. The most persuasive evidence in the case, many commissioners said, was a video depicting a tearful Lopez displaying a bruise on her arm, the result of the New Year's Eve argument with her husband.

Still, much of the commentary and questioning Thursday revolved around exactly what constitutes domestic violence.

"I believe that domestic violence is a serious offense and, as such, am glad that the allegations in this case were brought forth and taken seriously," said a Mirkarimi supporter named Danielle. "But I do not believe any serious offense was committed here."

Another supporter said: "I can tell you about domestic violence. It's when I had an infant in my arm and my husband shoved me, not a little tug on the arm.... Some people bruise quickly and easily. That's no proof of violence."

He was not convicted of domestic violence.

The prevalence of domestic violence can be traced to the abuse of children. Specifically, that corporal punishment is allowed. Once you teach a child it is okay to be hit by a parent, hitting your wife becomes a logical extension.

Anyone who believes it's okay to hit your child for "discpline" should have no problem with hitting your wife for the same lame reason. There will only be justice in the world when parents are arrested for hitting their children.

That is the totalitarian world that the leftist-feminist-psychos are leading us to.
Posted by George at 8:00 AM

But I still think grabbing another person's arm (unless in self defense) is a crime regardless. I do understand, as you've written, that marriages do have tension, but I do not believe it should extend to physical violence. If Mirkarimi can't follow the law he's sworn to uphold, how is he qualified to be the top cop in SF?

And what singles out the crime of domestic violence to be able to be a private matter, unlike if Mirkarimi were a mob boss, drug dealer, or a crook in general? There's a reason why criminal trials are usually labeled "People v. Defendant": because whenever someone commits a crime, any crime, the crime is against the state not just the victim.

All this said, while I believe that Mirkarimi deserved some punishment, I think the stay-away order for a misdemeanor was a bit much.

It wasn't just that evil commie pinko SF left wing that was going after Mirkarimi; Melanie Morgan, the conservative co-host of the KSFO morning show, also called on Mirkarimi to step down. And while SF Chron columnist Debra Saunders condemned Mirkarimi's actions, Saunders concedes called the city's prosecution of Mirkarimi a witchhunt.

Regarding the shooting at the FRC, there will always be politically motivated violence from all sides of the spectrum, like the Weather Underground and Symbionese Liberation Army and Ted Kaczynski from the left, then Tim McVeigh and the Sikh temple shooter and Knoxville Unitarian Universalist church shooting from the right. And it seems that in the modern era of hyper-polarized politics the left and right will be calling each other intolerant for years to come.

For some reason the comment you reprinted here still is invisible on the original post. Still i thank you for reprinting it and responding and for providing a discussion opportunity for all sides, and I think I picked a bad example with Polanski but I would respectfully disagree with some of your response.

You have a better analogy with the drug dealer. Libertarians have always complained about that being a victimless crime. But most crimes have a victim who makes a complaint.

I just don't get how grabbing an arm is a crime. If you told me that Gandhi filed a criminal complaint about someone grabbing his arm, then I would have said that not even a pacifist extremist like him would have been so silly. The arm grab was such a trivial thing.

Melanie Morgan is more feminist than I thought.

I think grabbing an arm can be a crime if the person grabbing it is stronger than the victim, and grabs it in such a way that the victim cannot escape from the hold. (False imprisonment?). Also, she had bruises on her arm which seems to say that it was quite a bit of pressure on her. If a strong woman grabbed a man's arm that same way, the woman should also be held accountable. I think in the Sheriff's case there was also the issue of fear on his wife's part during the incident (due to immense pressure on her arm and the possible anticipation of more physical acts, and also the fear of not being able to get out from his physical hold on her), which may enhance the charges. Barbara

Anonymous Barbara, if you read the story, you would have learned that grabbing the arm was prosecuted as a crime. However, "fear" is not going to enhance the charges. The criminal case is closed.

Dr. Angry Dad - I DID read the story. I was merely reacting to your view that you seem to think that this should not be a crime, that is all. Over and Out - Barbara

Yes, my view is that it should not have been a crime. There is a plot to destroy their family.

I thought of it as more or a political witchhunt, but I may be wrong. Barbara