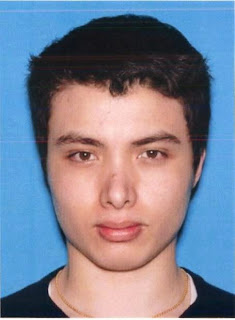 The 2014 Isla Vista killings by the Santa Barbara disturbed Eliot Rodger may be sparking new laws:


Hours after the Isla Vista shooting, Nancy Skinner, a California state assemblywoman from Berkeley, drafted a bill that would create a system for “gun violence restraining orders” in which relatives, friends and intimate partners could ask a judge to temporarily block someone who is exhibiting violent tendencies from getting a firearm. The measure is modeled after the state’s existing law on domestic violence restraining orders, but is similar in intent to gun-seizure laws in Texas, Indiana and Connecticut.

“In this case, if we had the law and the mother was aware of it, she could have utilized it,” Skinner said.

The cops did not use the laws already available:


SANTA BARBARA, Calif. — With the toughest gun-control regulations in the country, California has a unique, centralized database of gun purchases that law enforcement officers can easily search. It offers precious intelligence about a suspect or other people they may encounter when responding to a call. ...

Before a half-dozen sheriff's deputies knocked on Elliot Rodger's door last month in response to concerns raised by his mother about his well-being, they could have checked the database and discovered he had bought three 9mm semiautomatic handguns. Several law enforcement officials and legal experts on gun policy said this might have given deputies greater insight into Rodger's intentions and his capability for doing harm.

The deputies did not check the database. They left his apartment after finding him to be “shy, timid, polite and well-spoken,” in the words of Santa Barbara County Sheriff Bill Brown. The deputies saw no evidence that Rodger was an immediate threat to others or to himself.

Let's get some facts. Rodger was 22yo, and killed 7 people, including himself. 5 male, 2 female. 3 were stabbed to death with a knife. 4 were injured when he tried to run them down with his BMW.

Over 5,000 people have signed a White House petition saying "Elliot Rodger, an active MRA [Men's Rights Activist], shot and killed at least 7 young women". No, he killed 2 women, and was not active in any MRA group, as far as I know. Nor has any MRA group praised him for what he did. His autobiography mentions visiting a web site of sex-starved with conflicing opinions, but that's about all.

He had been under the care of a goofy Hollywood psychiatrist, but was horribly misdiagnosed and mistreated. Even if there were a law to take away his guns, they would not have taken his knife and BMW.

The killing has generated feminist claims of misogyny:


Elliot Rodger’s shooting rampage in Isla Vista, Calif., on Friday has triggered an outpouring of grief, sadness, and — on Twitter and Facebook — a torrent of feminist anger. The social media sites are where the hashtag #YesAllWomen has been trending wildly since Saturday, in response to Rodger’s premeditated motives — a lifetime of rejection by women — for killing six (along with himself) and wounding 13 people near the campus of University of California, Santa Barbara.

"I don't know why you girls aren't attracted to me but I will punish you all for it," the killer warned, according to a transcript of his now-removed YouTube video, “Elliot Rodger’s Retribution." "It's an injustice, a crime because I don't know what you don't see in me, I'm the perfect guy and yet you throw yourselves at all these obnoxious men instead of me, the supreme gentleman. I will punish all of you for it … On the day of retribution, I am going to enter the hottest sorority house at UCSB and I will slaughter every single spoiled, stuck-up, blond slut I see inside there.”

No, "a lifetime of rejection by women" is a gross exaggeration. He was only 22yo, and there is no clear showing that he was ever personally rejected by any woman.

What Rodger did do was to discover some uncomfortable truths about modern society. The hot young girls of today spread their legs for the obnoxious jerks, and ignore the gentlemen. The #YesAllWomen hashtag appears to be an acknowledgment by women that this is true for all women, and they like it that way.


Women have had enough. The stares. The butt-grabs. The little comments. And now this: a man writes a 140-page misogynist manifesto before killing six people, and yet – still – women are called hysterical for insisting this tragedy was driven by sexism.

In the days since Elliot Rodger murdered six people in Isla Vista, California, citing hatred of women and sexual rejection as the reason for his rampage, women across the world have come out en masse to share their stories of everyday sexism and misogyny – and to tell the world that enough is enough. On Twitter, Tumblr and on the streets, women laid bare just how pervasive sexism still is, and shot back against detractors desperate to believe that misogyny had nothing to do with the Rodger rampage.

Of course there is pervasive sexism. It is human nature. A better analysis comes from CH (aka Roissy):


Here are some uncomfortable truths about “sexual entitlement” that feminists dare not contemplate:

- What Elliot Rodger had was sexual desire. Feminists often confuse sexual desire for sexual entitlement (because feminists loathe male desire), but they are two very different things. To conflate them, one would have to assert that Rodger was weird for feeling attracted to a hot young blonde. But men are attracted to beautiful women. That is their nature. Rodger was no different than the vast majority of men in this regard, alpha and beta alike. However, this is the part where Liger goes astray; Elliot didn’t need to be surrounded by pretty Hollywood actresses or steeped in a culture that reveres female beauty to feel urges to want to fuck cute girls based on their looks. The stripling CH did not grow up in Hollywood, and yet I, like almost every boy I knew, valued girls for their looks above all else. No “looks message” is necessary for a boy like Elliot to feel sexual urges for cute chicks, and to feel dejected if those urges aren’t fulfilled.

- Women feel more true entitlement to men’s commitment and money than men feel to women’s sex. Few men will rape in order to feed their sexual entitlement, but many women will hold out until they get promises of commitment from men, and many marriages end with women feeling entitled to half their husbands’ wealth. A more accurate description of the sexual market, then, is that women have commitment and provision entitlement.

- Finally, the scariest realization for feminists: Sexually entitled men are more attractive to women! If you don’t feel entitled to a woman’s love, she won’t think you’re worth her love.

Elliot Rodger’s problem was not sexual entitlement. His problem was sexual desire coupled with crippling introversion that left him no means to satisfy his desire. This created a cognitive disconnect that he filled with his own untested theories for why women weren’t with him when they were with (to him) obviously inferior specimens.

The current Salon magazine has an article by a woman explaining how she would rather have hook-ups with bad boys than stable, healthy gentlemen with successful careers. She complains that the Amazon employees in Seattle are "boring", which I guess is code for not giving her the orgasms she desires.

Eliot Rodger needed to get essential life advice from his dad, but it appears that did not happen. His dad was British-American, his mom was Malaysian, and they divorced when he was 10 or so. The dad remarried a Moroccan woman, and his new family appeared on a TV reality show. The show presented him as having one son, not Eliot.

Eliot played video games and drove a BMW, while the dad made a Hunger Games movie about teenagers killing other teenagers for sport. They were probably both a little detached from reality.

CH says he would have given this advice to Eliot:


Women are different than men. Much different. Forget everything you know. You must understand this first.

You must be willing to listen and improve yourself or I’m wasting my time here.

Accept that women are different, and like different things in men than you like in them. That means stop worrying about your looks so much. They aren’t that important.

Don’t act needy. This is the most important lesson. Girls hate male neediness. Girls love men who seem like they get a lot of women and don’t chase after them. Fake it if you have to, it’s better than moping around like a loner.

Lift weights. Drink a lot of full fat milk. Don’t expect that you’ll look like Arnold in his prime. But if you stay the course, in one year you will be more muscular and more confident than you are now, and girls will notice.

You have to get over your shyness. Girls can’t read your mind. You spend too much time inside your head. Get out of there. Focus on making eye contact with people, and stop looking like a grouch. Talk to girls first as a friend. Get comfortable with that, then begin flirting with them and making your sexual intention known.

Stop taking whatever drugs your dad put you on. ...

Girls don’t want to hear about your problems. If you have to vent, do it with a male friend, or an older male guardian.

Never, I mean never, take advice from a woman, even if she is your mother.

If you want to know what a girl is really thinking, watch what she does. Don’t bother listening to what she says, as she herself is unaware what turns her on.

Never put a girl on a pedestal.

The CH/Roissy blog is a little over-the-top sometimes, but his analysis here is superb.

LOS ANGELES — It was the summer of 1999, and the parents of Elliot O. Rodger were battling over the boy’s deep and puzzling psychological problems as they struggled through a divorce.

Mr. Rodger’s mother, Li Chin, filed an affidavit describing Elliot as a “high-functioning autistic child,” and said she needed more child support to care for him. His father, Peter Rodger, countered with a Beverly Hills doctor, Stephen M. Scappa, who challenged that diagnosis, saying it failed to acknowledge the possibility of “depression or anxiety.” Dr. Scappa said that Elliot, almost 8 at the time, should be sent to a child psychiatrist for more examination and treatment. ...

Ms. Smith, who became the principal of Independence [High School] the year Mr. Rodger was a junior, said he had displayed classic symptoms of Asperger’s syndrome: He was socially awkward, had trouble making eye contact and was very withdrawn, if very smart. “Sometimes at lunch, kids would encourage him to join their tables,” she said. “Sometimes he would. But even when he did, he would just kind of be present.”

His longest conversations seemed to be with one of the special-education assistants, with whom he would discuss World of Warcraft.

“He had this push and pull between his desire to engage socially and his fear of rejection,” Ms. Smith said.

Yet he was liked at Independence. Ms. Smith said that some of the students had felt protective of him, and that staff members had referred to him as “our Elliot.”

Here we see the consequence of a bad diagnosis from the mom and a school official. Elliot did not have Asperger or autism. He appears to have been very shy with social anxiety and phobias. These qualities have very little to do with Asperger or autism. Asperger/autism has been a big fad for about 10 years.
Posted by George at 8:00 AM