When I was 8 years old, I always walked a mile home from school. And the school never punished anyone for name-calling.

To a lot of people, going for a nice 1-mile walk in sunny Hawaii would be a great treat.


A Kauai man is speaking out after he was sentenced and fined for making his son walk a mile home from school.

Kilauea resident Robert De Mond pleaded no contest to endangering the welfare of a minor.

But, he told KHON2, all he was trying to do was discipline his son.

De Mond said when he picked up his eight-year-old son from A-plus at Kilauea Elementary School, he noticed his son was on a time-out. On their way home, De Mond asked his son what happened.

“He answered, ‘I don’t know,’ and I go, ‘You need to take responsibility for your actions. Why were you in time out?’ He kept saying ‘I don’t know,” De Mond said.

About a mile from home, De Mond stopped the car along Kuhio Hwy. and told his son to walk home, he said.

“(I told him) basically think about what you did in A-plus to put you in time out,” he said. De Mond continued home with his two other sons.

From this, I blame the school for punishing the boy for trivial name-calling, and for not telling the dad the cause for the time-out. And I blame the meddling stranger who kidnapped the boy.


Turns out, a bystander saw him crying, brought him back to the school and called police.

A judge sentenced De Mond to one year of probation and a $200 fine, calling his actions “old school punishment” that wasn’t appropriate. He also has to take parenting classes.

De Mond told KHON2 he initially wanted to go to trial and try to prove to a jury that he didn’t do anything wrong, but his attorney, a public defender, advised against it.

“All I was trying to do is have my son think about his actions and there was no intention at all that I wanted to harm my son. I just wanted him to walk home and think about what he did by the time he got home,” he said.

So why was his son on a time-out? According to De Mond, he was caught name-calling at school.

A family attorney questioned why De Mond was even charged when Hawaii law allows parents to discipline children by spanking them.

“It seems odd to me that he would have knowingly endangered the child’s mental and physical welfare. He obviously was not expecting his child to be run over or absconded with or whatever,” said attorney Brad Coates.

But child psychologist Suzanne Gelb pointed out that punishment out of anger is never good for the child. She said it’s better to give the child a choice and let him know what will happen if he doesn’t obey.

“So the purpose of the consequence is not to make the child feel bad, it’s to let him know that you need to respond a certain way or you’re gonna have to forfeit a privilege and that’s a wonderful teaching tool — no punishment, no anger, just matter of fact,” Gelb said.

De Mond says he will probably handle it differently the next time he wants to discipline any of his three sons.

If he stays out of trouble during his one year probation, his record will be wiped clean.

There is no indicAtion that the dad punished out of anger, and it is just wrong that punishment out of anger is harmful. Gelb is a good example of why you should never take child-rearing advice from child psychologists.


In many people’s lives, walking to get places isn’t a punishment, it is a daily reality; the norm; how one gets places. However in Police State USA, a parent who allows their son to walk somewhere is arrested.

When a neighbor picked up the boy and called police, Mr. De Mond was arrested at his son’s school. He was charged with second-degree endangerment of the welfare of a minor. Mr. De Mond pleaded no contest.

The judge, Kathleen Watanabe, ruled that the punishment was “old-fashioned” and inappropriate. Walking was considered a punishment too severe to inflict on a child. Parents who discipline their children with walks risk criminal charges.

“These are different times,” Judge Kathleen Watanabe scolded, according to the Garden Island. “It is understandable that you became upset with your son, but it is dangerous for children to walk along the highway, and there are predators out there.”

Mr. De Mond was ordered to take parenting classes, pay the government $200. He is on probation for a year. If he is caught walking his son anywhere he risks jail time.

“It’s been pretty hard on the kids,” De Mond commented, adding that the family just wanted to put this behind them.

Walking is not illegal, even if it is “old-fashioned and inappropriate”. The chance of a predator attacking a boy who is alone for 5 minutes on a sleepy island village road is extremely small. The whole population of Kilauea is only 2,248. My guess is that it is more likely that the school will get swallowed up by a volcano.

Here is the dad's story:

He told his son: "I don't know is not an answer. You need to take responsibility for your actions. There has to be a reason that you were placed in time-out."

A mile from their house, he dropped his son off and asked him to "please walk home. When you walk home, you will have an answer better than 'I don't know.' And when you do come home you'll have an answer," he said.

De Mond said the stretch of the two-lane roadway -- Kuhio Highway -- is in a safe, rural area with acre-size agricultural lots, and a wide shoulder, 10 to 25 feet wide, where it's not uncommon to see people walking or riding their bikes.

When De Mond got home, he said he turned around and within five minutes was back at the location where he dropped him off.

"I was hollering his name, and he's nowhere to be found," he said.

"I went back and forth three times along the road," he said. "At this point, I'm pretty frantic."

He called police dispatch, and learned police had his son at the school.

De Mond and his wife arrived at the school, not knowing how or why his son got there.

"I wanted to see my son to see if everything's OK and talk to my son," he said.

Instead, his wife signaled to him that he was going to be arrested.

He learned that his neighbor found the boy, but rather than bring him home, took him to school and called police.

"It's been pretty hard on the kids," De Mond said. "I just wanted to get it over with, so I pleaded no contest" to second-degree child endangerment.

He was sentenced to probation, a $200 fine and parenting classes.

De Mond said his final court hearing on the matter was Wednesday, but he is continuing to take parenting classes. 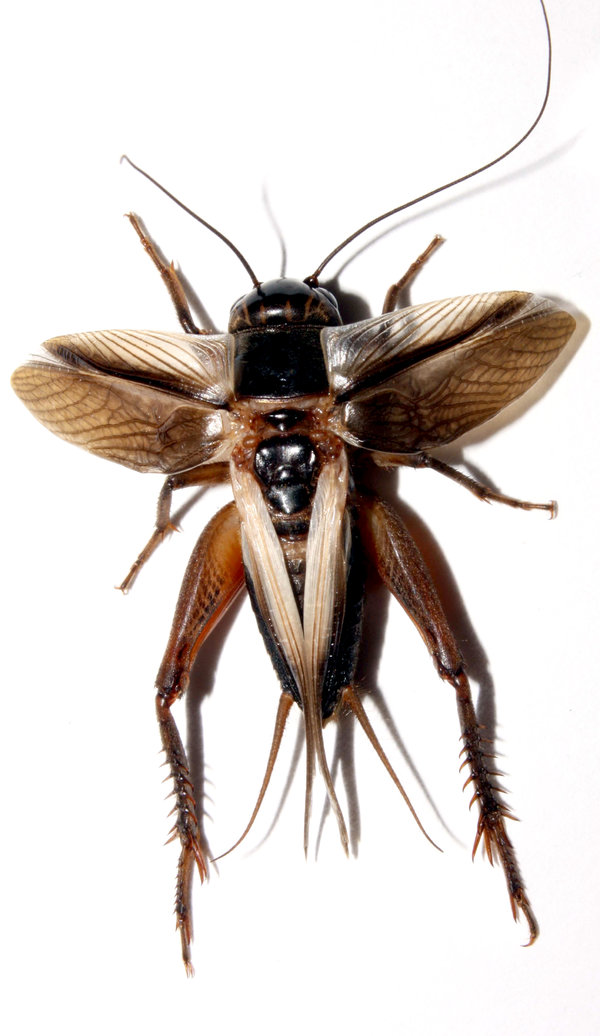 The Hawaiian emasculation is not just affecting humans. For millions of years, male Hawaiian crickets have chirped to attract females. Now they have been independently silenced on two separate islands. The NY Times reports:


But now, researchers report that the mutant males on each island stopped singing independently, through two similar but distinct adaptations. ...

Dr. Bailey said the crickets had adapted to become less vulnerable to a parasitic Hawaiian fly that is attracted to the males’ chirp. The fly larvae burrow into the cricket, causing it to die within a week.

But there is a downside: The males who do not chirp cannot attract females as easily as those who do.

“So instead they adjust their behavior,” Dr. Bailey said. “They hang around the remaining singing males and then intercept the females.”

There is a lesson here. The males have been forced to shut up to avoid parasites, and are left groveling for whatever females take pity on them. This is pathetic. The real men who stand up for their family and beliefs are being endangered, and the rext are being silenced by parasites.
Posted by George at 8:00 AM