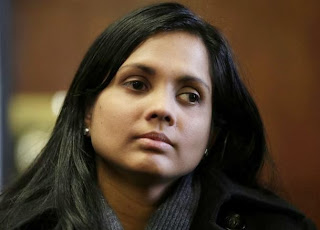 In a rare case of accountability for forensic experts, a corrupt chemist is going to prison.


A chemist at a Massachusetts drug lab accused of faking test results in criminal cases has been sentenced to three to five years in prison.

Annie Dookhan, of Franklin, pleaded guilty to obstruction of justice, perjury and tampering with evidence. Friday in Suffolk Superior Court.

She'll also be on probation for two years when she gets out of court.

Dookhan sent the state's criminal justice system into a tailspin last year when state police shut down the state Department of Public Health lab she worked at after discovering the extent of her misconduct.

Since the lab closed in August 2012, at least 1,100 criminal cases have been dismissed or not prosecuted because of tainted evidence or other fallout from the lab's shutdown.

She did not make all drug tests positive, of course -- just the one where she knew that the prosecutors wanted a positive result. More details:


State police shut down the state Department of Public Health lab she worked at after discovering the extent of Dookhan's alleged misconduct.

Prosecutors said Dookhan admitted "dry labbing," or testing only a fraction of a batch of samples, then listing them all as positive for illegal drugs, to "improve her productivity and burnish her reputation." ...

Dookhan's lawyer, Nicolas Gordon, argued that she made a series of tragic mistakes and that her only motivation was to be "the hardest-working and most prolific and most productive chemist."

"This is not a woman who ever set out to hurt anyone," Gordon argued during a court hearing last month.

She is a scapegoat. None of the prosecutors is being punished.

The judge piles on:


Sentencing guidelines called for a maximum sentence of three years for Dookhan, but Ball said in a ruling last month she wanted to impose a tougher sentence “given the magnitude of the harm she has done, considerations of general deterrence and, particularly, punishment.”

The judge said in the ruling that “the consequences of her behavior, which she ought to have foreseen, have been nothing short of catastrophic: Innocent persons were incarcerated, guilty persons have been released to further endanger the public, millions and millions of public dollars are being expended to deal with the chaos Ms. Dookhan created, and the integrity of the criminal justice system has been shaken to the core.”

Dookhan pleaded guilty to 27 charges, including evidence tampering and obstruction of justice. She worked at a now-closed Department of Public Health lab in Jamaica Plain.

A scientific determination that a substance seized by police is an illegal drug is a cornerstone of a drug case in court. A defendant cannot be convicted for possession or distribution of, for example, a harmless white powder.

No, the whole state criminal justice system should have foreseen this. Those judges and prosecutors surely realized that they were giving incentives for pro-prosecution faking.

It is very easy to devise a system where it would be impossible to do what Dookhan did. Just occasionally send duplicated samples to an independent out-of-state lab. Anonymize the samples so that no one at the lab knows which samples are supposed to be positive. Use some of the quality control methods that are now used in factories all over the world.

No, the state of Mass. deliberately created a system for framing defendants with bogus lab results.

The problem is worse in the family court. I do not see how Dookhan's crime is any worse that what psychologist Ken Perlmutter does. He refused to do my evaluation until he could call Commissioner Irwin Joseph to find out what outcome he wanted. And then he dry-labbed his report, ignoring the evidence on the record. This Complaint to State Board details how he failed to do a proper evaluation. The California board verified all the factual allegations, but did not take his license away.
Posted by George at 8:00 AM