No free speech in England 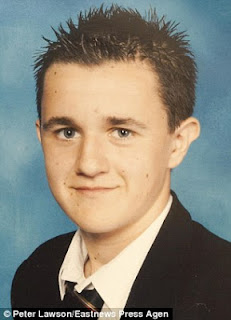 
A father has been jailed at a secret court hearing for sending a Facebook message to his grown-up son on his 21st birthday.

Garry Johnson, 46, breached a draconian gagging order which stops him publicly naming his son, Sam, whom he has brought up and who still lives with him.

In a case which is certain to fuel concerns about Britain’s shadowy network of secret courts, a judge sent the former music executive to prison for contempt at a closed-doors family court hearing in Essex at the beginning of last month.

This is crazy stuff. Usually I have to explain why it is bad to have social workers and judges micromanaging parents' lives. But no need here. Just read on.


After their parents’ divorce, the two boys chose to live with their father, following a series of rows with their mother over her new boyfriend.

But within a year of the divorce, Mr Johnson’s ex-wife made allegations to Essex social workers that he was neglecting the children and not feeding them properly at his smart family home.

An investigation by social workers cleared him of any wrongdoing and said the boys were fine.

A year later, in 2006, she made further allegations to social workers that he was mentally unfit to care for the boys.

Medical documents shown to the Mail by Sam and Adam reveal that Mr Johnson was examined three times by a local psychiatrist hired by social workers. The doctor wrote to social workers saying:

‘There is no evidence of mental illness. I cannot understand why there are concerns about Mr Johnson’s mental health.’

Social services refused, as a result, to get involved.

In 2007, the ex-wife started private care proceedings to remove the boys from their father. A judge put the boys under a ‘living at home with parent’ care order.

It meant they would continue to live with their father, but under supervision by social services.

This care order was accompanied by the gagging order to stop an increasingly anguished Mr Johnson talking about the case publicly.

Even naming his sons in the most innocuous circumstances – such as on Facebook – became a contempt of court.

The care order on Sam expired on his 18th birthday three years ago. The one on Adam in October last year when he reached 18. Normally, a gagging order imposed by a family court judge on a parent expires at the same time as a care order on the child. This one did not.

Here is another story showing the lack of free speech in the UK: 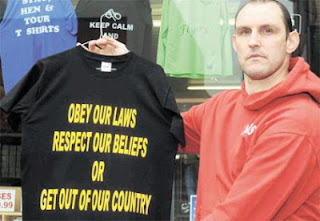 A NEWPORT shopkeeper has been forced by police to remove a T-shirt from his shop window because they felt it “could be seen to be inciting racial hatred.”

Matthew Taylor, 35, the owner of Taylor’s clothes store on Emlyn Walk in the city, printed up and displayed the T-shirt with the slogan: “Obey our laws, respect our beliefs or get out of our country” after Drummer Lee Rigby, 25, was killed in near Woolwich barracks in London last week.

But following a complaint from a member of the public, police came to his store and threatened to arrest him unless he removed the T-shirt from sight....

The shirt is not racist, unless maybe you believe that only certain races violate the law. Immigrants should obey our laws and respect our beliefs. The UK is being destroyed.
Posted by George at 8:00 AM

the UK has no constitution and no freedom of speech and far fewer freedoms in general than the US does.

my irish relatives learned this over the past two centuries. the government spied on and jailed without charges, thousands of irish in order to oppress then and maintain the status quo of protestant control and superiority.

seems we're going back to the pre-revolutionary war UK system. I admire the UK but that aspect of their culture (read the above comment) I do not.

What does "respecting" someone's beliefs mean?