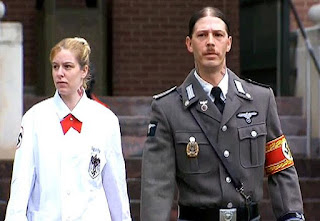 I mentioned this case in 2010, and suggested that you do not name your kid Adolf. This man is testing the limits of free speech. UPI reports:


The founder of New Jersey pro-Nazi organization "Hitler’s Order" appeared in family court wearing a Nazi uniform to petition for the right to visit his youngest son.

The family made headlines in 2008 when a supermarket refused to write Adolf Hitler Campbell's name on a cake for his third birthday. The Campbells complained that it was discrimination and another store provided a cake, but the news led New Jersey Division of Youth and Family Services (NJ DYFS) to investigate.

Heath Campbell, 40, hasn't seen his children in two years, and the three oldest have been adopted by another family. The children's mother has already given up her parental rights.

Prior to the closed-door custody hearing on Monday, Campbell told WCAU-TV that the Nazi uniform shouldn't affect the court's decision. "I'm going to tell the judge, I love my children; I wanna be a father, let me be it. Let me prove to the world that I am a good father." 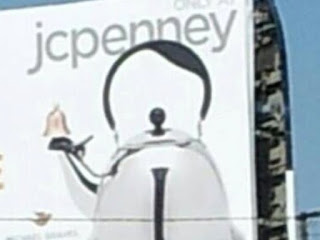 This is wacky, but I don't see how it is any worse than the dad being a Commie or a Mohammedan. He is entitled to his beliefs. He should not have lost his kids for his beliefs.

I attacked JC Penney for its Apple anti-consumer attitude and its gay Fathers Day marketing, but now it just got caught promoting a Hitler tea kettle on a billboard. Penney had to pull the product and the billboard. Perhaps someone at Penney thought that it was a joke. You cannot joke about one of the great evil men of the 20th century, I guess.
Posted by George at 8:00 AM

His children were taken away due to violence.

The law does not support a child being taken away from a parent due to beliefs.

The real problem is that the dad has decided to play Nazi in a state that doesnt have tolerance for Nazis.

I am assuming that they said that there were taking the kids for violence, because they did not want to admit that the dad being a Nazi was the real reason.

I missed your reply.

Good chance you are correct and also possible the state could not win simply on a "the dad is a Nazi" removal.

He ought to move have moved to another state. Lots of states would shrug at this.

I cannot help thinking that his sole priority is not getting his child back. I understand the anger, the powerlessness he feels. But i also know that wearing that outfit to court, is more about making the news and a spectacle than getting his children back.

I cannot explain this guy's motives, but I categorically reject this argument that a parent must be a conformist to show that he wants to see his kids. Sometimes some court evaluator will say "I told him how to raise his kids, and he had a different opinion, so that shows that he does not love his kids. If he really wanted what is best for his kids, he would shut up and do what I say."

All good points. I am still looking for a good father'a rights org. I am horrified by the courts and the lack of public revolt.