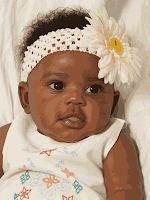 There has been a huge public controversy over a Utah child custody case. It is quite clear to me that the dad is in the right. Dads have no rights at all, if a wife can sell their baby without his consent. The NY Daily News reports:

A South Carolina man whose wife put their baby up for adoption without his knowledge or consent will be reunited with his daughter after a nearly two-year legal battle, a Utah court ruled.

A Provo judge ruled he was “astonished and deeply troubled" by an adoption agency’s deliberate efforts to circumvent the legal rights of father Terry Achane, who was serving as an Army drill instructor when his child was adopted without his knowledge.

I don't know why people are donating to the Freis, because I see no merit to their position. They already have 5 kids of their own, plus another adopted kid. The Freis are white. They tried to buy two black babies from an adoption agency, for $25k apiece.

It sometimes happens that a single mom gives a kid up for adoption, and claims that she does not know who or where the dad is. That can be a problem. But in this case, the mom was married to the dad, and he was serving in the Army. There could be no doubt that there was a legal and biological dad available, and it was easy to find him.

“The right of a fit, competent parent to raise the parent’s child without undue government interference is a fundamental liberty interest that has long been protected by the laws and constitution of this state of the United States, and is a fundamental public policy of this state," he said.

The judge blames the adoption agency, and it does deserve blame, but the real blame should be on the Utah family court that ordered this adoption against the wishes of the dad, required him to litigate the case for 2 years, and is still forcing him to wait 60 days for his child.

Usually it is the leftists and LGBT activists who are trying to redefine marriage. But this is Utah, a Republican state. Apparently the Mormons do not have much respect for dad's rights either.

What does marriage mean, if a man cannot stop his wife from selling their baby? It is taking him 3 years to get his baby back. And he still may not, as the Freis say that they are refusing to comply, and are raising money on their blog to finance an appeal.

Meanwhile, there more anti-dad propaganda in my local newspaper advice column. Here is a Wed. letter:

Dear Annie: I am perplexed as to what to do. I'm positive that my wife was a victim of incest, but I don't know how to broach the subject or how to help her.

Her sister manifests similar problems that I've heard are caused by rape by one's father. But I don't have any hard evidence, only a hunch. What can I do? How do you open such a discussion? — G.

This shows that even men have absurd anti-father prejudices. The guy has probably learned some supposed symptons from bogus pop psychologists like Dr. Phil or Dr. Drew. There are no such symptoms, and there are about 100 more commons reasons for crazy behavior in women. This is really sick that the public has been so brainwashed that a man comes to this conclusion about his own wife.

Here is a Thurs. letter:

Dear Annie: My incredible husband of two years has a 4-year-old daughter with his ex-wife. I have actively helped raise "Christie" since she was barely a year.

We haven't communicated with the mother since the time we took her to court for refusing visitation, ...

But lately, Christie has been questioning my relationship with her father, saying the reason her mommy and daddy are not together is because of me. When I ask her to do something she doesn't want to do, she says her mommy says she doesn't have to listen to me because I am not her mother. Even worse, she's been told that when my husband and I have a baby of our own, Daddy won't love her as much as the new baby. ...

Dear Stepmom: Many courts now recognize parental alienation. Suggest that your husband speak to his lawyer about this possibility.

No, this is not parental alienation. It is step-parent alienation. The court will not do anything.

The dad is just getting "visitation". If he has a baby with his new wife, and he is a real dad to that new baby, instead of being just a visitor to Christie, then he is probably going to love the new baby more than Christie. It is just human nature. The family court and the ex-wife have set out to screw up Christie, so having a new baby is his best chance for a normal child.
Posted by George at 8:00 AM

How much money did the wife receive for the baby that she sold ?

I canceled my newspaper subscription and its stupid advice column, but I happened to read a couple issues. Thursday's paper had this:

Taking awhile for that subscription to cancel, huh ?

The agreement between the wife and the adoption agency is confidential, and terms have not been disclosed. Besides her share of the $25k, the wife also saved 18 years of child support payments.

I restarted my subscription.

So, you don't actually know that the wife sold he baby to anyone, do you ? It's something that you decided happened, right ?

It has been reported that the Freis paid the wife's agent $25k for the baby, and that wife's financial obligations to the baby were terminated. I supplied a link to the story. If you have more info, then go ahead and post it.

Was this "agent" also an agent of the adopting couple, too ?

So, some agent was paid $25K. That doesn't equate to the wife selling the baby to anyone, at all, does it ? The wife put the baby up for adoption with an agency. The adoption agency received a fee of $25K.

You can "twist" it anyway you want. So why aren't the authorities after the wife for selling her baby ? They're not, because she never sold her baby to anyone.

The law allows the wife to get a share of that $25k, if the contract is drafted properly. The contract is confidential. The authorities may have no reason to believe that the wife violated the law.

This could change if the adoption agency is prosecuted.

So, who did the wife sell the baby to ? Did she give the baby up for adoption or sell the baby like you state ? How do you KNOW that she sold the baby, or are you just making this part up ?

The wife sold the baby to the Freis. The adoption agency brokered the deal. Why do you think that the wife took the baby to Utah?

Nowhere in the story does it say that the wife sold the baby to anyone, just in your version of the story.

The wife could have taken the baby to Utah for many reasons, including the adoption. Nowhere in the story does it explain why the wife went to Utah, does it ?

Why are you focusing on the triviality of whether or not the mother was paid? Who gives a rat's ass? A MAN'S CHILD WAS STOLEN FROM HIM. Do you want to try to talk your way around that, you stupid cunt?

I'm not trivializing the fact that the baby was stolen... George is doing that by focusing on what the woman was paid or not.

By making the story about the "sold" child George trivializes the facts.

I report on the financial incentives that contribute to parents losing their kids. Here there were two: the wife could get her share of the $25k agency fee, and she terminated all future child support obligations.

OK, report the "financial incentives"
but, don't report lies like your headline that states that the mom sold the baby.

How do you expect people to take you seriously about what you report when your headline is an obvious lie or distortion ?

I say she sold the baby. If you have any contrary evidence, please post it.

You're the only one that says she sold the baby. What else matters other than what you say ? Forget about the reports that YOU cite that don't say that the baby was sold.

You sound alot like the psych.s that you complain about.

That's what my blog offers -- I connect the dots for you.

No, I think you try to turn your opinions into facts.

No, you're the one focusing on whether the woman was paid. George made a completely logical inference, based on the fact that the baby was, in fact, purchased by the Freis. Any reasonable person would come to the same conclusion. But said inference, regardless of it's appearance in the headline, is incidental to the story.

Once again, the story is that a child was stolen from it's father. Your focus on the money is merely a disingenuous debating tactic, whereby any uncertainty, however trivial, is leveraged in an attempt to discredit facts that aren't in dispute.

While it seems exceedingly likely that the woman was paid, I freely admit that I have no knowledge of the actual arrangements. So let's say she wasn't paid. Does that make her actions acceptable? Legal? Of course not. She's still guilty of, at minimum, felony kidnapping. Frankly, I'd rate her as even more evil if she wasn't paid. With no financial incentive, we're left with hatred for her daughter and/or husband as the only motivation.

It is distracting to quarrel about how much money the wife got. I blame the system that gives the wife an incentive to steal the baby from the dad, the Utah judge that approved the adoption without the dad's consent, and the Utah courts for failing to resolve the matter in a timely manner when the dad demanded his baby.

It's distracting to read a headline about how a baby was sold when it was actually put up for adoption.

I said that the baby was stolen too. No one is using some trivial fact to be leveraged, or dispute anything else,a etc.

Wouldn't the mother have had more of a financial incentive in keeping the baby and receiving child support for 18 years ? This would have far exceeded any portion of the $25k she may have received from the adoption.

Don't you think George would have then be highlighting the mother's greed for pursuing the child support vs. any portion from the adoption ?