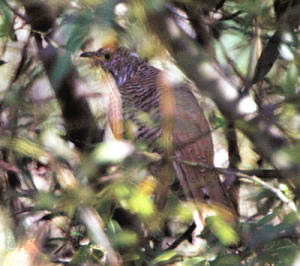 I am always complaining that my local family court has gone cuckoo, and that is literally true. The cuckoo bird has only been seen in the continental USA in 1981 where Ted Kennedy killed a woman, and now just outide the local county family court. The Santa Cruz Sentinel reports:

WATSONVILLE -- The news of a rare bird sighting in the wetlands near Ramsay Park has set hearts aflutter in the birding community.

Lois Goldfrank, a veteran Santa Cruz County birder, spotted what's been tentatively identified as a common cuckoo on Friday morning at Watsonville Slough while on an outing with the Santa Cruz Bird Club.

"It was a great feeling to see such a bird," Goldfrank said. "She seems to be very happy eating caterpillars. Everyone is catching her gobbling them up so she may stick around for a while."

Don't let the name fool you. The common cuckoo, a 13-inch bird also known as the Eurasian cuckoo, breeds in Europe and Asia, and winters in central and southern Africa. The bird rarely has
been seen in North America and then mostly in Alaska's westernmost islands. The only other recorded sighting of the cuckoo in the lower 48 was in 1981 on Martha's Vineyard.

I goto Watsonville to see cuckoo judges, lawyers, and shrinks, and now I can go there to see genuine cuckoo birds!
Posted by George at 8:00 AM

George - that is very funny! And it is a RARE bird, at that! Barbara

When was Kennedy convicted of murder ?

Kennedy was not convicted of murder. He did admit to driving the woman off a bridge, and leaving her to die. He was convicted of that.

No, that's not what he was convicted of. He said that he dove into the water 7 or 8 times to save her life. That's what he's on record of.

Wikipedia says "Kennedy pleaded guilty to a charge of leaving the scene of an accident after causing injury." A friendly judge suspended the mandatory jail sentence. Kennedy testified that he went back to his hotel room, and he had trouble sleeping because he was worrying about whether Kopechne escaped from the car. He called friends for advice, but he did not make any report to police until the police confronted him. So yes, Kennedy left Kopechne to die and was convicted of it. How do you think she died, if Kennedy did not kill her?