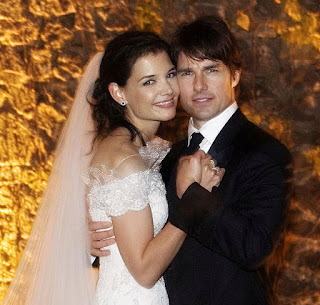 I mentioned below that Katie divorces Tom Cruise, and the NY Times explains the procedures of their wacky religion:

Couples like Katie Holmes and Tom Cruise who are looking to end their marriages are expected to find — through the Scientology organization — ways of working things out. So divorce for Scientologists can often be a long and difficult process, according to several former members of the church. ...

Ms. Llywelyn and Mr. Lee, a member of the Church of Scientology, married in 1995, and she joined the church, too. Five years later the marriage was falling apart, she said.

Before deciding to divorce, the couple agreed to pay for a form of counseling that Ms. Llywelyn said entails sitting in a room answering questions while hooked up to a device known as an E-meter, which Scientologists believe can detect unexpressed thoughts.

She said a chaplain, also known as an auditor, questioned them for hours. “You do it until the needle is flat, until the sign on the machine doesn’t read any more thoughts,” she said. “They think that once you unload all these bad things, you’re going to fall madly back in love with each other.” And when they didn’t, Ms. Llywelyn said, she was assigned an in-house lawyer. “Scientologists aren’t allowed to sue each other,” she said, because of a policy to contain any public disputes. ...

Yet sometimes, according to Claire Headley, another former member, the church encourages divorce. Ms. Headley said she was told that she must divorce her husband of 12 years, Marc Headley, or be kicked out of the Religious Technology Center, a Scientology compound near Hemet, Calif., that is known as Gold Base. Ms. Headley said that she had grown up in the church and it was all she knew, but that she and her husband began having trouble after expressing doubts about church authorities.

Weird as this is, the new Obama-support Muslim Brotherhood govt of Egypt now has se slave marriage.

Bad as all these procedures are, American family courts are worse. Katie and Tom being hooked up to an E-meter will probably do more good than a court-ordered psychological evaluation from some anti-family blood-sucker.
Posted by George at 8:00 AM

Update: Their lawyers have announced that the couple has reached a settlement privately. CNN reports: "While no details of their agreement are public, the former couple said they are 'working together' in the 'best interests' of their young daughter."

I guess either Tom, Katie, or one of their lawyers might have read your blog with all those family court horror stories.

I don't know what makes you think that Obama supports the Muslim Brotherhood in Egypt. Barbara