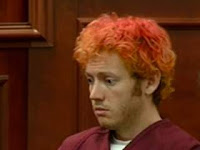 CENTENNIAL, Colo. - James Holmes spent a year in a small neuroscience doctoral program, surrounded by scientists and roughly three dozen classmates delving into the inner workings of the brain. ...

"He had, as is now common knowledge, excellent academic credentials," said Barry Shur, dean of the university's graduate program.

Shur said the graduate program is "like a family" in which faculty carefully monitor students' progress.

"It would be a logical step to assume there were people in that program who worked closely with him and would have the expertise to assess his behaviour," said Mary Ellen O'Toole, a former FBI profiler and the author of the book "Dangerous Instincts: How Gut Feelings Betray Us."

"But being able to recognize concerning, troubling behaviour does not mean you can prevent a mass homicide," O'Toole said. "There are many people at a university level who act quirky and strange and don't go out and commit mass murder."

So top university experts in neuroscience worked closely with Holmes, and they could not detect that he was going nuts. On the other hand, a local gun enthusiast claimed to see something that the neuroscience professors could not:

Glenn Rotkovich, owner of a private Colorado gun range outside Denver, quickly concluded there was something wrong with Holmes.

Holmes applied to join the range in late June. But Rotkovich said that after calling Holmes back and hearing a "bizarre" voice mail message — spoken in a strange, low-pitched voice with heavy breathing — he concluded he didn't want Holmes as a member.

"I flagged him to people and said, if he shows up, I don't trust him," Rotkovich said.

This reasoning is dubious, as a lot of kids have wacky answering machine messages, and others do not necessarily see the humor.

I am not sure why Penn State U. is liable for failing to predict the Sandusky scandal, while no one is blaming U. of Colorado for their neuroscientists failing to identify this year's biggest lunatic.

Holmes even sent his plans:

The flame-haired accused killer mailed the notebook to a University of Colorado psychiatrist long before the bloody rampage that left 12 dead and 58 wounded last Friday, FoxNews.com reported.

“Inside the package was a notebook full of details about how he was going to kill people,” a law enforcement source told FoxNews. “There were drawings of what he was going to do in it — drawings and illustrations of the massacre.”

The package, now in the hands of the FBI, listed Holmes’ name in the return address and included drawings of armed stick figures gunning down stick figure victims.

The psychiatrist claims that he never opened the package. He would be in a lot of trouble if he did not claim that.

I post this because the family court often assumes that experts somehow have the ability to predict domestic violence or other bad behavior, based on reading spouse gripes, or doing an interview, or conducting a psychological test. Dan Brewington is going to prison because some incompetent psychologist profiled him as a violent threat. Dan just wanted to see his kid and hold authorities legally accountable.

Unfortunately, the science does not exist for identifying violent threats.

Charles Whitman killed 14 people at the University of Texas at Austin in 1966, and asked for an autopsy on his death. Sure enough, he had a brain tumor that seemed to be the root cause of his mental instability. That was a case where neuroscientists might have identified him as a threat, and cured him. But most of the time, it cannot be done.
Posted by George at 8:00 AM