In the custody of the wrong parent 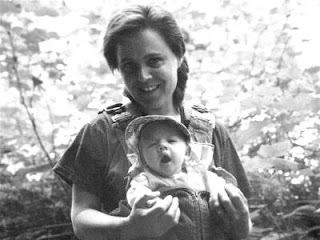 A big story in the local paper had this picture with this caption:

Karen Rosewood and her infant daughter, Sequoia Rosewood, go for a stroll at Fall Creek in Felton in 1991, months after Sequoia's birth through artificial insemination.

The print edition of the Santa Cruz Sentinel has this headline:

Did you jump to the conclusion that Karen Rosewood is the mother, but the father got custody of the girl in a divorce?

Not even close. Rosewood was not the mom. The dad was a sperm donor, and is not in the picture. The daughter is now 21, and complains:

“I grew up in such a fragmented way that in some way, it does feel like I don’t have parents,” she said Tuesday.

That's what happens when a girl is raised by lesbians. She never sees her dad, and always feels as if something is missing.

Dr. Ride married a fellow astronaut, Steven Hawley, in 1982. They decorated their master bedroom with a large photograph of astronauts on the moon. They divorced in 1987. Dr. Ride is survived by her partner of 27 years, Tam O’Shaughnessy; her mother, Joyce; and her sister, Ms. Scott, who is known as Bear. (Dr. O’Shaughnessy is chief operating officer of Dr. Ride’s company.)

That could mean that the women were just business partners, but Ride is now being hailed as the first lesbian in space. That logic is dubious, as she was married to a man during her two space flights in 1983 and 1984. (She wasn't the first woman in space, as a couple of Russians preceded her.) I don't think that we have any confirmation that Ride actually had sexual relations with O’Shaughnessy. Maybe the cosmic rays in outer space sapped her sex drive.

I don't care about Ride's private life, but it is wrong for newspapers to marginalize parents in this way. Obviously they are trying to promote lesbianism but that is no excuse to try to redefine common English words like "mother" and to ignore fathers.

That could mean that the women were just business partners,

Obviously they are trying to promote lesbianism

So which is it ? werethey just business partners or is it obvious they are trying to promote lesbianism ??????

How is stating, "her mother Joyce"
trying to redefine common nglish words like "mother". Her mother's name is Joyce.

I'm the baby in the photo above, now 21 and happily adopted by my mother. The article originally appeared in the Santa Cruz Sentinel and was a little dramatic and out of touch for my taste.

This is what happens when straight people who have no GLBTIQ friends or family write articles about gay rights issues - they just don't understand the vastness of this particular civil rights movement and the complications inherent within.

It's an ignorant assumption that "partner" in the context of the astronaut's obituary meant "business partners" because in today's world, the gay and lesbian lexicon has been adopted by mainstream media. You'd have to have your head pretty far up your ass not to understand how context affects the meaning of the word "partner". Alternatively, this is not "promoting lesbianism" as lesbianism has existed forever. Rather, this is an attempt to be respectful of people who bleed red and just happen to like having sex and sharing their life intimately with a person of the same sex. Particularly lesbian women face assault, rape, and other threatening and destructive behavior on a daily basis simply because they like other women. And that's fucked up. It's important for the media to normalize homosexuality because it helps to stop hate crime. If you don't think of a person as an "other" who needs to be corrected, then you're less likely to try and rape them straight. And, yes, this a real thing.

I have so many more thoughts on this piece and on gay rights and have reached out to the author to discuss this more. Hope to get the opportunity.