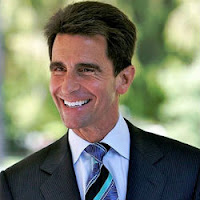 I posted below about a proposed California law to give judges discretion to declare 3 or more parents for a child.

A reader who supports this crazy idea cites this quote from Ed Howard:

Supporters of the measure say it stems from a 2011 appellate court decision involving a young girl and her two mothers. When one of the women was sent to prison and the other hospitalized, the girl's biological father was unable to act as her legal guardian under current California law, which only recognizes two legal parents per child.

"Right now, under California law, a judge is being forced to rule in a way that he knows will hurt the child in front of him by denying the child a relationship with a real parent that would otherwise meet the stringent test for being a parent," said Ed Howard, of the Children's Advocacy Institute at the University of San Diego School of Law.

"This has nothing at all to do with the broader culture wars," Howard told FoxNews.com. "It has to do with recognizing on the ground who should make the call as to whether or not the evidence and the facts show that it's in the best interest of the child."

Howard's argument is nonsense. There is no "stringent test for being a parent". The girl's biological father is a real parent. Always was and always will be. The problem was a bunch of crazy laws that favor unstable lesbians over the real dad.

Yes, this is a shot in the culture wars. The LGBT advocates are doing everything they can to destroy the traditional 2-parent family. It is not some quirk of California law, as similar movements are elsewhere. A divorce lawyer claims:

Delaware, Pennsylvania and the District of Columbia all permit a child to have more than two parents.

Mark Leno, the gay Jewish Russian Israeli rabbinical student whose life partner died of AIDS and who is sponsoring this terrible bill, is promoting the bill as helping a real dad. But that is not the situation at all. Here is 2011 California case:

So the real dad tried to be a father all along, but was cut out of the picture by a pair of unstable drug-addict lesbians, one of whom ended up in prison, and other in the hospital after being stabbed by a jealous boyfriend. And the dad still had trouble getting his daughter.

The lesbians were not married, but were "registered domestic partners". That is like marriage in California law. They were not exactly a happy couple, as their partnership was interrupted by domestic violence, drug abuse, restraining orders, and affairs with boyfriends. They managed to cut the real dad out of life of his daughter by this law:

Family Code 7540. Except as provided in Section 7541, the child of a wife cohabiting with her husband, who is not impotent or sterile, is conclusively presumed to be a child of the marriage.

That is, the lesbian was presumed to be the father to an unrelated child because she was cohabiting with the mom. I am not sure how she qualifies as a "husband, who is not impotent or sterile", but that is what happened.

Because of this, Leno wants to give a judge the discretion to make all three of them parents.

Actually, the dad won that 2011 appeal. The (lower) juvenile court did declare all 3 to be parents, but refused to let the dad have his daughter because that might jeopardize the relationship with the unrelated lesbian who was presumed to be legal father. The appeals court said that the dad could get the child under the BIOTCh (best interest of the child), and should have under existing law.

Lesbian marriage is all about forcing kids to grow up without their fathers. Gay activists like Leno are all about destroying the American family. They talk about equality and rights, but they are dead-set against equalizing moms and dads in family law, and dead-set against the rights of kids to have fathers. Leno's proposal takes us further down the rabbit hole.

The law pertaining to that 2011 case is easily fixed. The girl has one mom and one dad who wanted to take care of her. The mom became a drug addict and went to prison. The dad should have immediately gotten custody, no questions asked. And that is what would have happened, except for laws from anti-American sickos like Leno.

As a comment yesterday pointed out, this is not about the liberty to engage in perverted sex acts. Leno and his allies are anti-liberty and anti-equality. The proof of that is in the way that his proposal gives the judge such extremely broad discretion to disrupt the most fundamental family relationships based on his own personal prejudices. Nothing could be more contrary to the concepts of liberty and equality.

By analogy, suppose a new law said that a local judge could censor blogs based on the best interest of the readers. Would that be liberty and equality? No, it would be the opposite. It would be rule by arbitrary whim. And it would not be equal either, because the judge would have his biases and favorites. With liberty, people would have rights that judges would have to respect, and with equality, judges would have to treat everyone the same.

Update: A reader suggests that I identify Mark Leno more fully. Besides what I wrote today and yesterday, he led a communist front group:

Far left California State Senator Mark Leno is promoting a bill to mandate the teaching of Lesbian, Gay, Bisexual and Transgendered history and contributions to society in the state’s public schools.

Leno, who in 2008, served on the advisory board of the Revolutionary Communist Party‘s World Cant Wait, anti war front group, with jailed attorney Lynne Stewart, and R.C.P. leader Sunsara Taylor, is co-sponsoring the Bill with Equality California and the Gay-Straight Alliance Network.

He defends teaching LGBT propaganda in California K-12 schools on NPR radio. I do not know whether or not he is a citizen of Israel.

A bill moving through the California Legislature would allow judges to recognize more than two legal parents for a given child, opening the door for alternative families to seek legal recognition of their relationships.

“There are literally scores of different families and circumstances,” Mark Leno, the state senator who sponsored the bill, said.

“This is about putting the welfare of the child above all else,” he said.

As fewer children are raised in traditional two-parent households, Mr. Leno’s bill has moved California to the center of a growing debate over how — and whether — such alternative family arrangements should be legally recognized. ...

Instead, Mr. Leno said he hoped that allowing the court to recognize a third or fourth parent could help keep children out of foster care in a small number of cases.

Mr. Leno’s bill follows a court case here last year in which a young girl being raised by two lesbian mothers was sent to foster care after a fight landed one mother in the hospital and the other in jail. The girl’s father, who had maintained a relationship with his daughter, asked the court to release her to his custody.

The trial court ruled that both mothers and the father were all parents. But a California appeals court reversed the decision, ruling that the child could have only two parents.

Still, parents hoping to keep their children out of foster care are hardly the only ones who hope to benefit if the bill becomes law.

The article repeats the phony Leno argument about this being about foster care, but at least it explains that it is the LGBT and anti-family lobbies that really want the law.
Posted by George at 8:00 AM

Mark Leno, the gay Jewish Russian Israeli rabbinical student whose life partner died of AIDS and who is sponsoring this terrible bill, is promoting the bill as helping a real dad.

Don't you think that he IS helping the real dad ?

Inferences about his background ?

You leave out that he's a State Senator. He's American, not Russian. He's not an Israeli, or he WAS, at one time a rabbinical student.

You're obviously going out of your way to distort his background and make some unwarranted inferences.

Can't the facts make your argument without such manipulation ?

No, Leno is not helping the real dad. I identified Leno as a state senator and quoted his biography in yesterday's post. You say that he is not an Israeli, but I could not find whether he currently claims Israeli citizenship or not. If you have that info, then please post it.

Maybe he doesn't claim Israeli citizenship because he's not Israeli ? Do you think that he's still a rabbinical student ?

You referred to him as "the gay Jewish Russian Israeli rabbinical student". Of cousre, you could have mentioned that he was American and a Calif. State Senator, but chose not to.
.
Your unclever forms of manipulating facts and ommissions, just helps demonstrate how weak your actual arguments are.

I quoted a 143-word biography about Leno. I am not going to repeat it all every time I refer to him.

You are right, it is possible that he is not a citizen of Israel.

Reliable sources will refer to him as Calif. State Senator Leno, and you'll just refer to him as "Mark Leno, the gay Jewish Russian Israeli rabbinical student whose life partner died of AIDS". I understand.

Finish the sentence. After the quote is "and who is sponsoring this terrible bill". It is a Calif. state senate bill, and he has to be in the senate to sponsor the bill. Or just click on the links for more info.

Do you think that he's still a rabbinical student in Israel these days ?

Leno's proposal is so bizarre, so sick, so anti-American, and so harmful that it is hard to understand why anyone would favor it. So I give some background info on him that I got from Wikipedia. Since you asked, I added an update to my post with some more info. I think it helps. If you are going to tell me that some America-loving Christians also voted for this bill, then you might have a point. I would like to hear them explain their votes also. But this is Leno's bill, so he is the one I am addressing.

I don't have to explain to you what I consider bizarre, sick and anti American.

The updated info is NOT from wikipedia, right ?

Since I asked, again, Do you think Leno is still a rabbinical student in Israel these days ?

Don't you think that the R.C.P. chose a stupid name given that they're supposed to be a "front group"?

Leno is appreciated by a large group for his Anti War efforts.

I gave the source for the updated info. If it turns out to be inaccurate, I will correct it. The front group is called The World Can't Wait.

Leno is not a rabbinical student anymore. As far as I know, he never became a rabbi.

The Democrats control California, and may have the votes to pass this anti-family law. I am just exposing it for what it is.

I gave the source for the updated info. If it turns out to be inaccurate, I will correct it.

You should correct it because there is no source for the updated info. is there ?