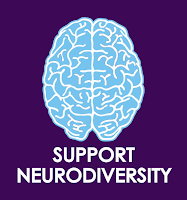 I just found this announcement of a conference in New York tomorrow:

On August 5, 2011, Syracuse University will be hosting a regional symposium on neurodiversity and autistic self-advocacy. Neurodiversity is a concept and social movement that advocates for viewing autism as a variation of human wiring, rather than a disease. As such, neurodiversity activists reject the idea that autism should be cured, advocating instead for celebrating autistic forms of communication and self-expression, and for promoting support systems that allow autistic people to live as autistic people.

The purpose of this event is to raise public awareness of the concepts of neurodiversity and the different facets of the neurodiversity movement, and to increase understanding and dispel myths about what it means to be against curing autism.

Registration is still open, and free. I am ordering a t-shirt.

Judge Heather Morse has taken my kids away by accusing me of possibly having Aspergers, a condition related to autism. All ten psychological evaluations for the court said that I did not, but this judge seems to think that she knows more than the psychologists.

The judge is an ignorant bigot. She does not know what Aspergers is, and yet she is willing to use it as an excuse to force my kids to grow up without a father. Even if I did have Aspergers, there is no scientific basis for saying that they are any worse parents than anyone else, and there is no public policy to take kids away from parents with Aspergers.

This is a court that uses Dr. Gay to do a psychological evaluation of me. All he had to say was to complain about how I brush my daughters hair and about what vegetables I feed them. As far as I could tell, he has no training or experience with women or children. The court also has orders being written by a parenting coordinator with a phony mail-order degree.

The judge is an ignorant bigot. She should be forced to attend a conference like the above Neurodiversity Symposium. Maybe she would learn that there are two kinds of people in the world, and that she is relying on morons to discriminate against people who are much more psychologically healthy than those court experts.

there is nothing wrong with you.

you have some money that they can steal from you along with stealing away your kids.....

its what is in the best interest of their pockets, and they will hire blondes or make up stories and diseases or whatever they please, because in family court...there is no constitutional rights.

there is the domestic relations exclusion. it is not a court of law. until it is a court of law, it is the palace of perjury and corruption.

your kids know the score on this. that is the one bright spot for you. they can always tell what is going on with this b.s. and greed.

i pray you get your kids back.

i applaud all the hard work you have done and continue to do to enlighten others and support them.

thank you and may god be with you, always.

Through the Looking Glass: http://www.lookingglass.org/
Legal Program
The Legal Program has over 1,500 contacts a year with parents, advocates, social workers and others participating in cases involving parents with disabilities. In these cases, the parent's custody is being challenged by the state or an able bodied partner, in part or in whole, on the basis of their disability.