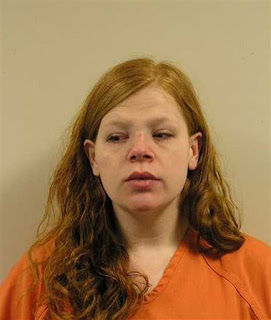 BISMARCK, N.D. - Police responding to a domestic disturbance arrived at Stacey Anvarinia's home to find the mother breast-feeding her 6-week-old baby in front of them. And she was drunk, they said.

Officers arrested the woman, who later pleaded guilty to child neglect and faces up to five years in prison.

I am all in favor of sobriety, but it appears that no one really knows whether drunken breastfeeding is harmful or not:

If alcohol intoxication were really the issue, the obvious thing to do would have been to measure the alcohol level and compare it to what the experts say is medically safe. But no chance of that:

It's unclear how much Anavarina had to drink. Police never conducted a blood-alcohol test. Investigators believed she was drunk, and her arrest on a charge of child abuse and neglect did not require a test.

"The majority of our problems are caused by alcohol," said Grand Forks Police Capt. Kerwin Kjelstrom. "Our officers handle it so much that it is pretty much a general knowledge thing to know when someone is intoxicated. It's pretty obvious." ...

"This case is more than just the breast-feeding. It was the totality of the circumstances," said Grand Forks Police Lt. Rahn Farder. "It is quite unusual for a mother to be breast-feeding her child as we are conducting an investigation, whether she was intoxicated or not."

In other words, if these cops see something out of the ordinary, they just handcuff someone and blame it on drunkenness. Nobody seems to care much whether some actual crime was committed.

This case has also been criticized by an obstetrician on the Skeptical OB's blog:

Ms. Anvarinia was charged with felony child neglect solely because she was breastfeeding. Since there is no scientific evidence that breastfeeding while intoxicated is harmful to an infant, the officers and prosecutors simply made up the "crime." In that, I suspect, they were influenced by the current American hysteria over what children eat. Not a day passes when Americans aren't bombarded with messages about the "dangers" of childhood obesity, the "dangers" of sugar, the "dangers" of salt, etc.

Moreover, Americans seem chronically unable to understand the concept of risk. They routinely obsess about trivial or even non-existent risks, and they wrongly ascribe far more risk to "dangers" they perceive as uncontrollable (alcohol inadvertently given to a baby through breastmilk) than those over which they think they have control (rolling over and suffocating a baby sleeping in the same bed). Couple that with lack of familiarity with breastfeeding, and suddenly it is a "crime" to breastfeed while intoxicated.

This incident is deeply troubling for another reason. It is an attempt to criminalize mothering if it does not meet entirely arbitrary standards.

Fatherhood has already been criminalized.
Posted by George at 8:00 AM

I have read recently of a woman who wanted to adopt her sister's drug addicted baby but the court system says the heroin addicted mother and her boyfriend hadn't screwed up bad enough YET to have the newborn removed from that situation. And yes, she was nursing the babe. So, why is this girl being tormented and jailed for being drunk and nursing her child? Yeah. We are a seriously screwed up society.

oh, and next time, a few words from a judge: "Next time: DO NOT open the door! You don't have to open your door even if it is the police. They MUST have a search warrant to GET info out of you; you DO NOT have to cooperate. You do not have to answer their questions whether they are police or social workers." ~from a judge's perspective